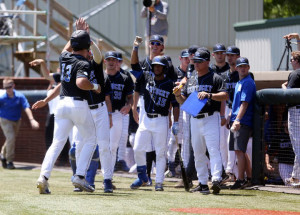 The University of Kentucky baseball team beats Tennessee on Sunday, May 14, 2017, at the Cliff.
Photo by Britney Howard

LEXINGTON, Ky. – Kentucky bounced back in perfect fashion from its first rough weekend in Southeastern Conference play, sweeping Tennessee on the strength of Sunday’s 7-2 victory in front of 3,085 fans at Cliff Hagan Stadium on a magnificent Mother’s Day afternoon.

The three-game wipeout of the Volunteers sets the No. 8 Wildcats up for next week’s showdown against Florida with the SEC championship on the line. The Cats (36-16, 18-9 SEC) will need to win at least two of three games to claim a piece of the division – and possibly overall – crown in coach Nick Mingione’s first season at the helm of the program.

Junior infielder Riley Mahan continued his white-hot weekend, ripping a two-run triple in a four-run first inning as part of a 3-for-5 day where he fell just a home run short of hitting for the cycle. For the weekend, Mahan went 9-of-13 (.692) with two doubles, a triple, three home runs, six runs scored and eight RBI.

Mahan’s effort was bolstered by sophomore outfielder Tristan Pompey (3-for-4, solo home run), senior outfielder Zach Reks (3-for-5) and junior catcher Troy Squires (2-for-3, two RBI) as the Cats piled up 15 hits on the afternoon.

Freshman lefty Zack Thompson picked up his second victory of the week, getting starter Justin Lewis out of a jam in the fourth and pitching 3.1 innings of scoreless baseball. Logan Salow pitched the final 2.1 innings to pick up his 10th save, the second-most in a single season in school history.

Bot 1st – Tristan Pompey and Zach Reks both singled to centerfield. Pompey scored and Reks moved to second when Kole Cottam reached on a fielding error from the shortstop. Riley Mahan tripled down the right field line, which scored Cottam and Reks. Troy Squires stepped in and singled to left field, scoring Mahan. UK 4, UT 0.

Top 4th – Jordan Rodgers singled through the left side of the infield. Andre Lipcius and Pete Derkay walked. Matt Waldren was hit by a pitch and Max Bartlett walked, scoring Rodgers and Lipcius. UK 4, UT 2.

o   UK has won eight of its 10 SEC home series the past two seasons.

o   It was Salow’s 10th save, the second most in a single-season in UK history, trailing just the 12 Trevor Gott recorded in 2013.

o   He has reached base safely in 19 straight games.

o   He has reached base safely in 23 straight games.

o   The home run was Pompey’s eighth of the season, all coming in SEC play.

o   Reks now has 21 multi-hit games this season and 32 for his career.

o   Reks has reached base safely in 22 consecutive games.

o   Squires now has multiple hits in five of his past six games.

Kentucky hosts its final regular season home game when Northern Kentucky makes the short trip south for aTuesday night affair. First pitch is at 6:30 p.m. and fans can listen on the UK Sports Network via UKathletics.com and iHeart Radio, as well as on 630 AM WLAP, and watch on SECN+.