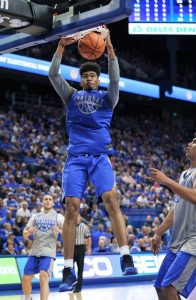 By Ricky Blair
Ok, it is a Blue-White Game, so what can you expect.  One time Junior Braddy scored around 40 points in one of these scrimmages, yet he never saw much playing time in the regular season games during his four year career at UK in the early 90’s.  Because of that, I wouldn’t put much stock in what we saw here on Friday.

What we did see was that the freshmen will have to carry a heavy load for this team.

Kevin Knox looks like the best player on the team.  He had 18 points in the first half of action, going 8 for 10 from the field including a three-pointer.  Knox also had 6 rebounds in the first half.  He finished the game with 22 points.

PJ Washington also looks the part.  Washington had 16 points in the first half and showed a talent for handling the ball, especially for someone playing the power forward position.  Don’t be surprised if he is one of the primary ball handlers for the Wildcats this season.

Quade Green will be the starting point guard, his confidence with the ball in his hands was evident.  He is a little small compared to the height on this team, but he showed an ability to play among bigger players.  Green had 15 points, including 2 three-pointers before he went out with cramps with about 15 minutes to go in the second half.

Shai Gilgeous-Alexander will be a good defensive player, but his passing skills will have to improve in order for him to be a consistent point guard.  He seemed to settle down a little in the second half when he was playing for the Blue team.

Nick Richards has length and jumping ability, but will struggle a lot on offense.  His best offense will be off lob dunks.  Richards does have an intimidating presence around the basket, so look for him to lead the team in blocks.

The long wait for Hamidou Diallo is over, but his first game action in a UK uniform was unimpressive.  He was 4 of 11 from the field in the first half and took way too many off balance shots.  The good news is he does have an incredible leaping ability and should be a human high-light reel with some of his dunks this season.

Sacha Killey-Jones has a nice shot, but he struggled around the basket, he does look slimmed down from a year ago, so maybe he will show improvement as the season plays out.

Tai Wynyard will add some muscle when the Wildcats need a strongman, but he will struggle to see playing time again this year without some significant improvement.

Brad Calipari has a nice three-point shot and may get an opportunity or two, if opposing teams decide to zone this Kentucky team.  Calipari is probably one of the three or four best shooters on this team.  His lack of size and athletic ability will make it hard for him to see much game action.

Freshmen Jarred Vanderbilt and Jemarl Baker did not play because of injuries, so we will have to see, if and when they get back how much they will add to the team.

Most Calipari teams need a little time to jell, this one may struggle mightily at the beginning of the season, but could be an aggressive defense team come tournament time.  They are long and athletic.  As always, it should fun to see how Calipari brings it all together as the season progresses.  Let the games begin.