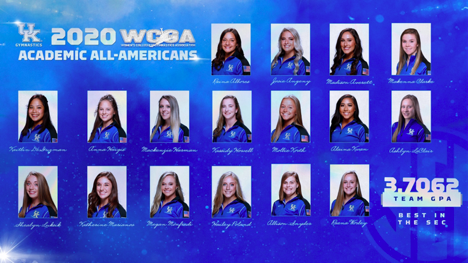 Despite on-floor competition being cut short in the regular season, Kentucky gymnastics has continued to dominate on a national level for its work in the 2019-20 school year. Seventeen Wildcats were recognized as Academic All-Americans by the Women’s Collegiate Gymnastics Association on Tuesday, while the team posted an overall GPA of 3.7062.

Kentucky led all Southeastern Conference institutions with both the most WCGA Academic All-America selections and the highest team GPA.

Kentucky’s 17 WCGA Academic All-America selections were tied for seventh-most in the country, while its 3.7062 team GPA ranked 18th.