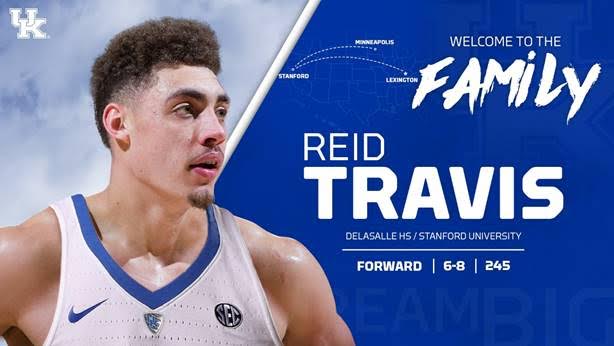 LEXINGTON, Ky. – Kentucky’s 2018-19 roster was already loaded with what appears to be a powerful mix of talent and experience, but the Wildcats gained another boost of both with the addition of Stanford graduate transfer Reid Travis.

The two-time First Team All-Pac-12 selection announced Wednesday that he will transfer to UK to pursue a master’s degree. Under NCAA graduate transfer rules, Travis will be eligible to play for the Wildcats in the fall after graduating with his undergraduate degree in science, technology and society on Sunday.

“Sunday I had the opportunity to fulfill a childhood dream of graduating from Stanford University,” Travis said. “I built relationships and memories at Stanford that will last a lifetime. I’m extremely proud to be able to say that I’m a Stanford alum. I want to thank my friends, coaches, teammates, alumni, professors, administrators and student body for playing such a big role in the man that I’ve become over these past four years.

“With that being said, I’m looking forward to a fresh start and another year of working towards my dreams. As I move on to the next step of my career, I wanted to find a school that will continue to align with my academic and athletic interests. After getting to know the staff and players on my visit, it became clear to me that there was no better place for me to start this next journey in my life then at the University of Kentucky.

“I’m excited to work hard every day and give everything of myself to the program to compete for a national championship and turn the game I love into a profession. Big Blue Nation, I can’t wait to get started.”

Already equipped with the nation’s consensus No. 2 recruiting class and returners Jemarl Baker, Quade Green, Nick Richards and PJ Washington, Travis will provide the Wildcats with a big-time scorer and rebounder in the post.

“I felt good about where we stood with next year’s team, but when I found out how much Reid wanted to be here, I had to take a look and say, ‘OK, can he help us? Can he help our team become even more potent and can we help him reach his dreams?’ The answers were absolutely,” UK head coach John Calipari said. “You’re talking about a two-time all-conference player who could have very well entered the NBA Draft with what he’s done in his career. He was one of the best big men in the Pac-12 last season, if not the country. Our fans know when it comes to talent and experience, I’m always picking talent, but Reid gives us both.”

Travis was a three-year captain for Stanford and graduated 16th on Stanford’s career scoring list with 1,427 points and 758 rebounds. He was a National Association of Basketball Coaches First Team All-District selection as well as a U.S. Basketball Writers Association All-District pick in 2017-18.

Dependably dangerous is what the Wildcats will get with Travis. He scored in double figures in all but one game a season ago and recorded double-digit rebounds in 16 games. All 16 of those double-figure rebounding efforts resulted in double-doubles, including the final seven games of the season. He scored 20 or more points in 18 games, including a career-high 33 late in the season.

His 2016-17 season was nearly just as impressive. Travis logged nine double-doubles as a redshirt sophomore, including scoring 29 points at No. 4 Kansas. He was the only player in the Pac-12 and one of only five individuals in the top six conferences (Pac-12, Big 12, Big Ten, Atlantic Coast Conference, Southeastern Conference and Big East) to finish the season ranked in the top five of his conference in both scoring and rebounding.

Reid is a prolific low-post, back-to-basket scorer, but he added a 3-point shot to his game last season, making 18 shots from behind the arc.

The addition of Travis is UK’s first incoming transfer since Mychal Mulder for the 2015-16 season.

Earlier in the week, Kentucky commit Ashton Hagans announced he would be reclassifying and joining the Wildcats immediately. With Hagans and Travis now in the fold, UK has 13 players on the roster for the 2017-18 season.

The Wildcats will return the most points and most rebounds they have from a prior season’s roster since the 2014-15 team that went 38-1 and advanced to the Final Four. UK will pair that up with another highly touted recruiting haul.

Fans will have a chance to see the 2018-19 team in action this summer during a foreign exhibition tour in the Bahamas, Aug. 6-13. Tickets and hotel rooms are available by visiting AtlantisBahamas.com/UK.