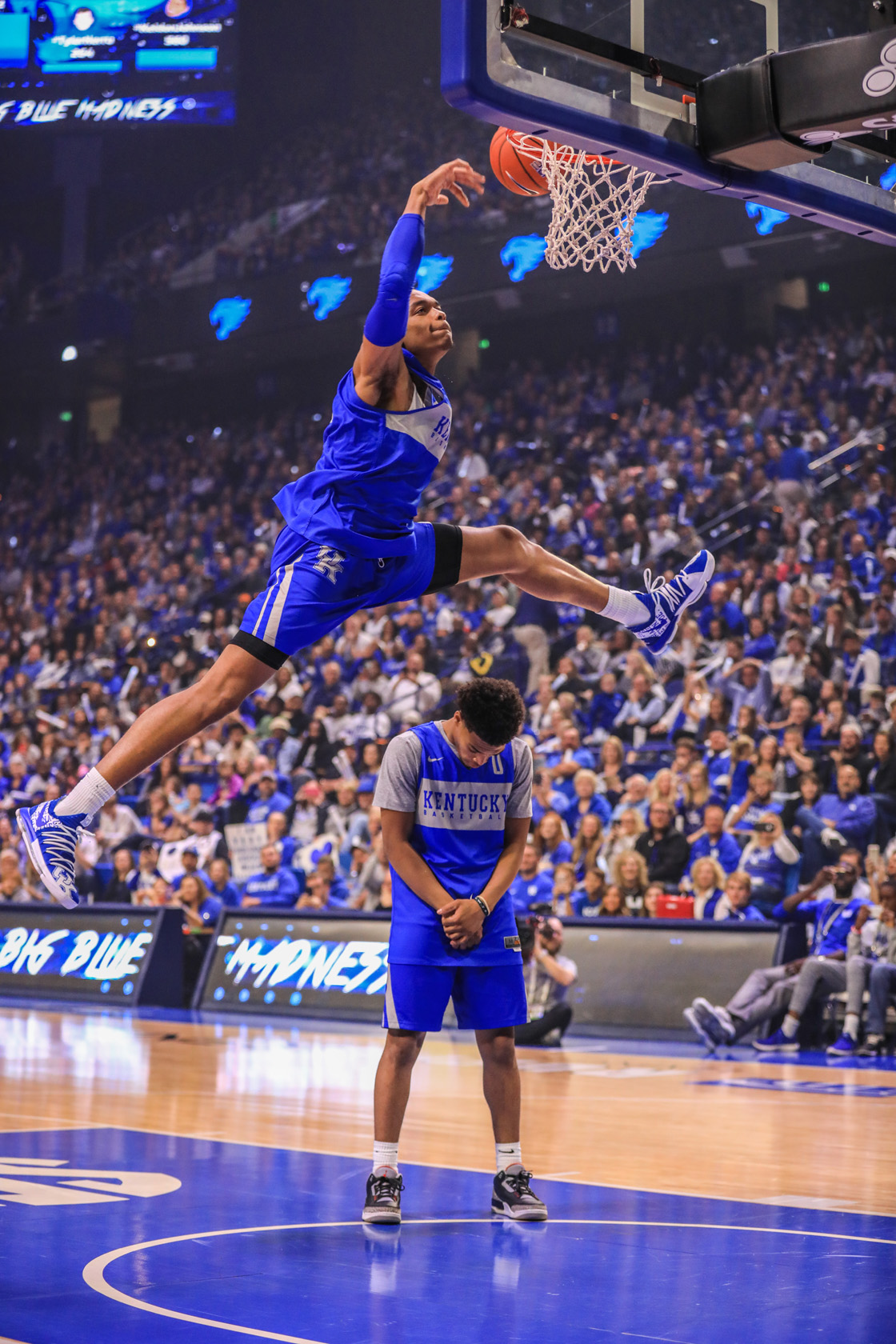 Although we didn’t hear him say it directly, John Calipari apparently still loves his team. During the most recent Kentucky Basketball Media Day, the UK head man repeatedly professed his adoration for his talented squad of young superstars. Just as he did with John Wall, Anthony Davis, Willie Cauley-Stein, Karl-Anthony Towns, and Tyler Ulis, Coach Cal waxed eloquently about the merits of this year’s Wildcats—hereby officially sending fan expectations soaring into the Big Blue stratosphere.

Before you start making reservations for the Final Four in Minneapolis, realize that Cal’s teams haven’t always matched up to the preseason hype. The 2013 NIT team—with the unfortunate injury to Nerlins Noel—obviously fell short of True Blue expectations. Other Calipari teams–such as his most recent one featuring Kevin Knox and Shai Gilgeous-Alexander—simply ended up lacking the star power needed to make a significant run. The point being that star-studded recruiting classes don’t automatically translate into national championship juggernauts right out of the gate.

Don’t worry, though—I’m not pooping on this year’s parade. This mix of mega-talented recruits and critical returning lettermen appear to be on par with Coach Cal’s best Kentucky team to date—the 2015 thirty-eight and one group that fell just a couple of games short of perfection. Why is this current team potentially as good as that one? Let me count the ways.

First of all, the return of PJ Washington is HUGE. The 6’8”, 228-lb power forward declared for the 2018 NBA draft, but decided to come back to school not only to improve his draft stock (and free throw shooting), but with the hopes of winning a national championship. After leading the team in rebounding and averaging double figures in scoring last year, PJ gives the Cats the bona fide, experienced leader they so desperately need. Together with a new and improved, rim-protecting Nick Richards, Kentucky’s inside presence suddenly moves from liability to strength.

Adding to that presence, graduate transfer Reid Travis joins the party. Talk about a fortunate get. The First Team All-Conference selection averaged 19.5 points and 8.7 rebounds last year playing for Stanford in the highly competitive Pac-12. Not only is Reid an experienced and skilled low-post player, but he’s also one of the most articulate interviews I’ve ever encountered. His pre and postgame eloquence will be worth five points alone. I’ll look forward to some verbal sparring with him in the season to come.

Shooting has always been one of Team Calipari’s bugaboos. Cal’s first Kentucky team, the 2010 squad, was arguably his best. But they couldn’t throw it in the ocean and ultimately fell victim to West Virginia in the regional finals. You might say that outside of Doron Lamb and Devin Booker (for about a month), Calipari really hasn’t had the benefit of any dead-eye shooters.

All that promises to change this year. Word has it that Jemarl Baker Jr., if he ever gets a clean bill of health, will be as accurate a knock-down shooter as anyone who has previously worn the blue and white. Tyler Herro, who’s sure to be a fan favorite, and returning sophomore guard Quade Green, have also both shown that they can consistently tickle the three-point twine. Gone are the days of opponents cheating down low, daring Wildcat bricklayers to chuck up air balls.

So far, so good you say? I haven’t even mentioned the most explosive portion of Kentucky’s arsenal. Incoming freshman Ashton Hagans, Immanuel Quickley, EJ Montgomery, and Keldon Johnson are all multi-talented five-stars that can run, jump, pass, and shoot. Of the four, Johnson comes in with most hype, but all of them may be talented enough to enter the pantheon of John Calipari’s growing list of one and dones.

It gets even better. All those guys take pride in their defense—being able to hassle you endlessly to the point of despair.” Ashton is a pit bull, a mauler on the ball,” Calipari gushed. ”You can play he and Immanuel together. Tyler’s better than I thought he was. I thought Keldon would be better than Tyler defensively, but I’m not sure of that. And our big guys can guard guards, so we can switch everything, we can scramble around, we can still press. There’s a lot of stuff we’re going to be able to do.”

One final point to get you salivating. Everyone knows how important team chemistry is. Elite and talented superstar teams with infighting and jealousies seldom taste success. Initial reports indicate that this year’s team is feasting on brotherhood. Calipari’s servant leadership lessons have already taken hold. Throw in their on-the-court jump start with the Bahamas exhibitions, and you’ve got the makings of one of the most exciting and fun-to-watch UK teams ever assembled. A legitimate run towards Championship Number Nine should be anticipated and expected.

Will it happen? It’s still a bit too early to tell. But from what I’ve seen and heard so far, they’ve got as good of a chance as anyone. With a couple of favorable breaks, Minneapolis in April seems like a distinct possibility.

“Well, if this team becomes empowered and it becomes their team, then this becomes scary,” Cal warned. Come to think of it, you might just want to make those hotel reservations after all.

Dr. John Huang is a columnist for Nolan Media Group, Bluegrass Sports Nation, and Sports View America. He’s currently working with former LEX18 Sportscaster Alan Cutler on his new book. If you enjoy his writing, you can read more at www.huangswhinings.com or follow him on Twitter @KYHuangs.