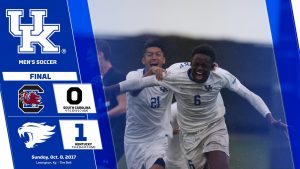 LEXINGTON, Ky. – Kentucky’s Aime Mabika scored the winning goal with seconds remaining in regulation to give the Wildcats a 1-0 win over South Carolina on a rainy Sunday at The Bell.

Both affiliate members of Conference USA for men’s soccer, Kentucky and South Carolina are the only two SEC institutions that sponsor varsity men’s soccer. As such, the fixture is colloquially known as the SEC Championship game.

It was a sloppy game with players fighting through a steady flow of rain, but the pitch held out well considering. Quality offensive opportunities were had at each end.

Kentucky looked effective going forward in the first half, but couldn’t make a break through. South Carolina mounted more attacks in the second half, but while it took nearly the entire allotted time, Kentucky eventually opened the scoring with only a handful of ticks on the clock left to spare.

“It was great to come out with the win,” midfielder Sam Stockton said. “Sloppy conditions. We didn’t get to play our normal style, but we battled and fought and did what we had to do to come out on top. It is always nice to get a conference win and a home win as well.”

In what seemed like it would have to be the last chance of the regulation 90 minutes, Connor Probert fired a free kick from the left side five yards out from the box. The shot was blocked by USC’s goalkeeper, but only as far as the big redshirt freshman.

The finish was Mabika’s second of the season. He previously scored on a penalty kick – which proved to be a 1-0 winner as well – at New Mexico.

With the win, Kentucky tied the all-time series with USC at 7-7-3.

UK improved to 5-3-1 against USC in Lexington.

Kentucky will play at Indiana next Wednesday at 7:30 p.m