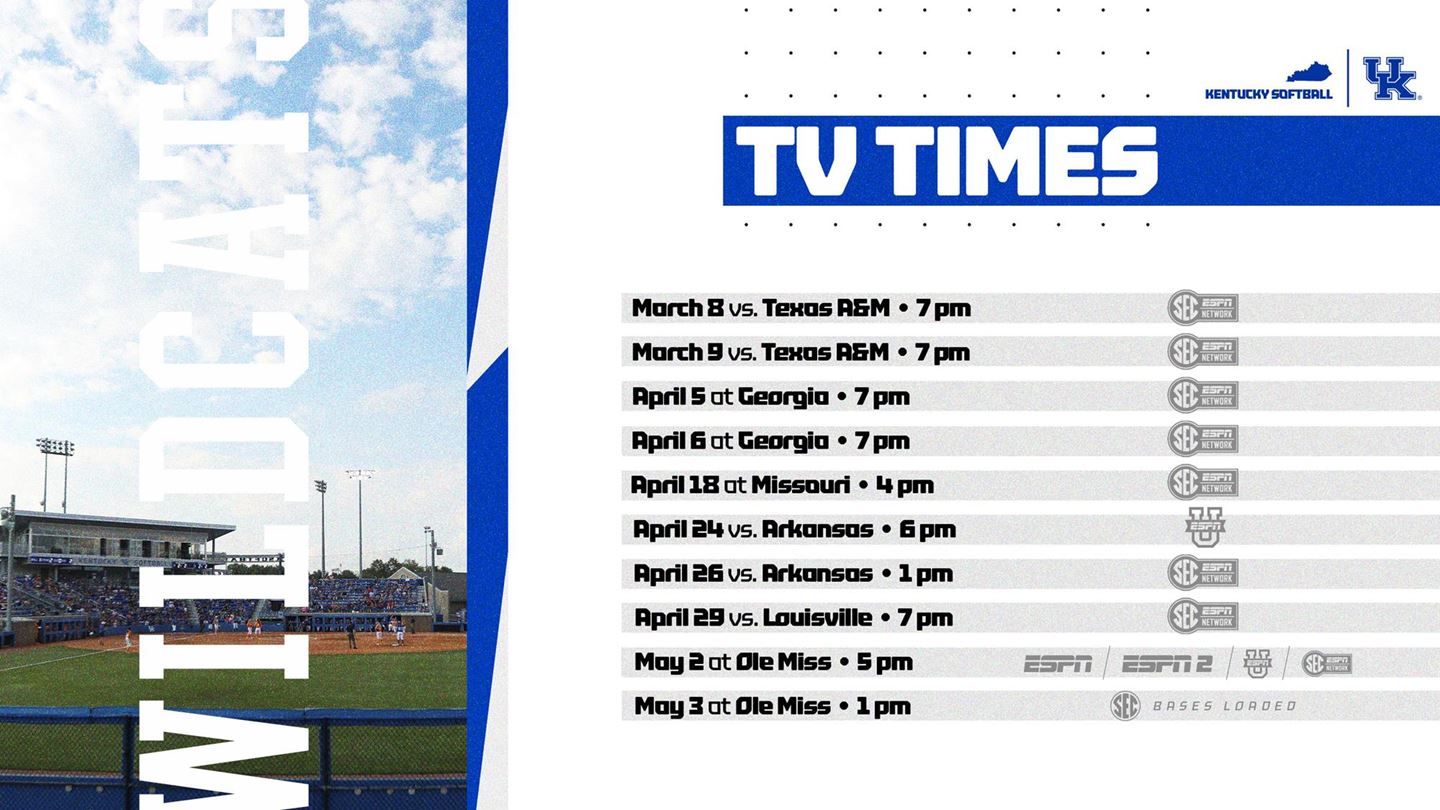 LEXINGTON, Ky. – The Kentucky Softball team will appear 10 times in the national spotlight this season, as ESPN and its family of networks released the 2020 softball schedule on Tuesday afternoon.

Kentucky will have at least eight games shown on the SEC Network, one on ESPNU and one more on SEC Network whip-around Bases Loaded coverage.

UK will see the spotlight for the first time on home-opening weekend March 8 and 9 as both games against Texas A&M will be shown live on the SEC Network with 7 p.m. ET first pitches. March 9 will be head coach Rachel Lawson’s night on “Mic’d Up Monday’s”, as she will be wearing a microphone so fans can get an inside glimpse into the dugout of an SEC game.

Two games of UK’s series vs. Georgia will be broadcasted on the SEC Network with the Sunday and Monday games April 5 and 6 carried on the network and both again will be 7 p.m. ET starts.

The second game of UK’s three-game series at Mizzou will be shown on the SEC Network at 4 p.m. ET April 18.

ESPNU will carry Kentucky’s first game of a three-game series against Arkansas at John Cropp Stadium beginning at 6 p.m. ET. The Sunday conclusion of that series will begin at 1 p.m. ET on the SEC Network the afternoon of April 26.

The “Battle of the Bluegrass” featuring UK and Louisville will be on April 29 at John Cropp Stadium in Lexington and will be a 7 p.m. ET start on the SEC Network.

The last two games of the series will be determined as the league standings play out on the final weekend as UK faces Mississippi on Oxford, May 1-3. The May 2 game will be at 5 p.m. and will be assigned a network at a later date.

SEC Network Bases Loaded returns for the final day of the regular season as the show will have whip-around coverage from all six SEC series as the bracket gets set for the SEC Tournament in Tuscaloosa, Ala.

All games in the SEC that are not on a linear network will be streamed live on the SEC Network+, ESPN3 and the ESPN app with a service provider.

Additional dates to this schedule could be added.