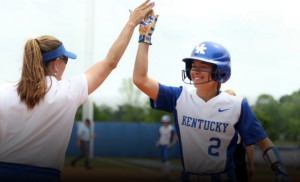 Wildcats win first series against a top-five team since 2015
LEXINGTON, Ky. – The No. 18 Kentucky softball team got three runs in the first and three in the sixth, which helped propel them to a 7-4 win over the No. 4 Texas A&M Aggies and clinch a top-five series win for the first time since 2015.

With the win, Kentucky improves to 34-14 overall and is now a season-high 20 games above the .500 mark. The Wildcats have won two Southeastern Conference series in a row now, and sit tied for seventh with LSU at 11-10 in league play. With the loss, Texas A&M falls to 41-7 overall and is now 15-5 in the SEC this season.

UK’s win on Saturday coupled with Sunday’s result clinches a series win against a top-five opponent for the first time since March of 2015 when UK took two of three from the No. 1 LSU Tigers at John Cropp Stadium.

Jenny Schaper hit a first-pitch home run to left field in the bottom of the sixth inning to make UK’s lead 5-3 and push across what would wind up being the eventual game-winning run.

Breanne Ray was the key player of the game, going 1-for-3 with a two-RBI single into right field to make it 7-3 Kentucky in the bottom of the sixth inning. The at bat came with one out and runners on second and third.

Kentucky scored three runs in the bottom of the first inning. Abbey Cheek started the game by advancing on an error to second base and Bailey Vick knocked her in with an RBI single. Katie Reed singles, as did Alex Martens to drive in Vick and make it 2-0. The third run came across on Kentucky’s fourth base hit of the inning, off the bat of Rachael Metzger on a bloop into right field. UK 3, TAMU 0

With two outs and two on in the top of the third, Texas A&M pitcher Samantha Show homered to left field to tie the game. UK 3, TAMU 3

In the bottom of the fifth, Breanne Ray led off the inning with a walk. Pinch runner Brynlee Bigelow scored on a Brooklin Hinz RBI groundout to the shortstop and gave UK a one-run lead. UK 4, TAMU 3

One inning later, Jenny Schaper belted a first-pitch home run over the fence in left field for her sixth long ball of the season. Abbey Cheek was walked and Bailey Vick singled to put two on with nobody out. Ray then singled into right and scored the final two runs for UK. UK 7, TAMU 3

Texas A&M loaded the bases with one out in the top of the seventh inning and got one run on an RBI fielder’s choice, but Meagan Prince got the final out on a grounder to Reed in the hole at shortstop to end the game. FINAL – No. 18 Kentucky 7, No. 4 Texas A&M 4