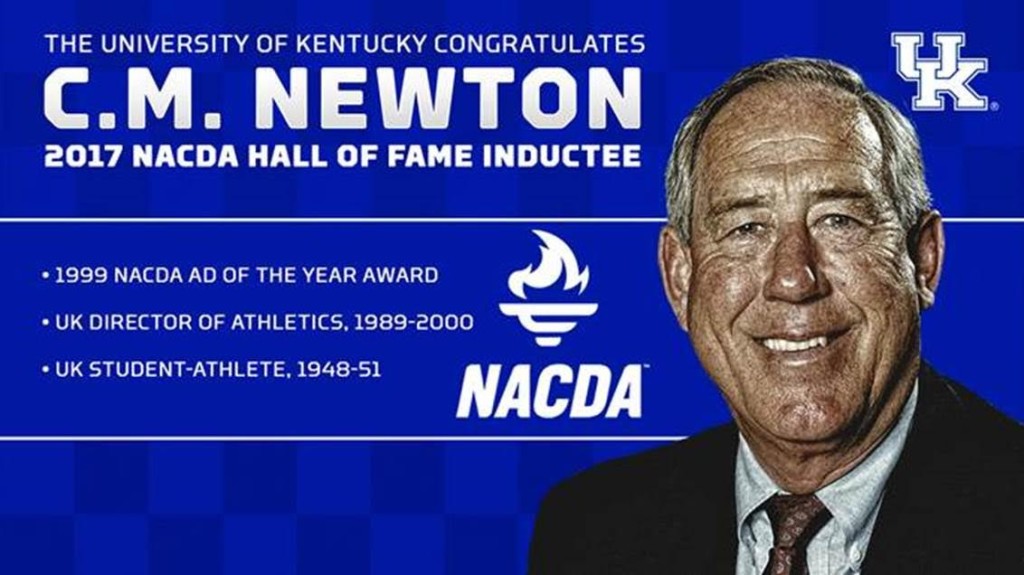 Served as UK Director of Athletics From 1989-2000
LEXINGTON, Ky. – C.M. Newton, former director of athletics at the University of Kentucky, was inducted into the National Association of Collegiate Directors of Athletics Hall of Fame on Wednesday in Orlando, Fla.

Newton served as athletics director at UK from 1989-2000.  His term as AD was marked by the addition of three sports – men’s and women’s soccer and softball – expansion of facilities and growth in revenues in response to the increasing financial pressures of college athletics.

Arriving at UK during a troubled time for the men’s basketball team, Newton’s hiring of Rick Pitino rejuvenated the program, eventually leading to a national championship in 1996 and then another NCAA title in 1998 under Orlando “Tubby” Smith. Newton’s hiring of Smith and Bernadette Mattox marked the first two African-American head coaches for UK men’s and women’s basketball.

Despite the time demands of being an athletics director, Newton also made Kentucky prominent by his service on the national and international levels.  He was a member of the NCAA Division I Men’s Basketball Committee from 1992-99, and as chairman in 1998, had the pleasure of handing the national championship trophy to Smith.

Newton was president of USA Basketball from 1992-96, overseeing the creation of the original U.S. Olympic “Dream Team” of NBA players in 1992. He was chairman of the NCAA Basketball Officiating Committee from 1992-95 and was a member of the FIBA (international basketball) Central Board for many years.

Newton was recognized for his achievements by being named Athletic Director of the Year by NACDA in 1999, an honor that also was bestowed on current UK AD Mitch Barnhart in 2015.

Newton’s collegiate career began at Kentucky, where he was a basketball forward and baseball pitcher from 1948-51. He was a letterman on the 1951 national champion basketball team and eventually went on to pitch in the minor leagues for the New York Yankees.

Newton served as a lieutenant in the United States Air Force before going into coaching.  He was head basketball coach at Transylvania, Alabama and Vanderbilt, winning several championships and coach of the year honors.

Along the way, Newton became known as a pioneer of racial integration.  In addition to the hiring of Smith and Mattox at UK, Newton also recruited the first African-American basketball players at Transylvania and Alabama.

Newton was chairman of the NCAA Basketball Rules Committee from 1979-85.  It was during his watch on the rules committee that the two most important rules changes of the modern era – the shot clock and the 3-point shot – came into existence.

The current accolade is the latest in a lifetime of honors bestowed on Newton. In addition to being named Southeastern Conference Coach of the Year in 1972, ’76, ’78, ’88 and ’89, and AD of the Year in 1999, Newton was given the Naismith Award by the Atlanta Tipoff Club for his contributions to basketball; the John Bunn Award by the Naismith Basketball Hall of Fame for his contributions to the game; and finally, was an inductee to the Naismith Basketball Hall of Fame.