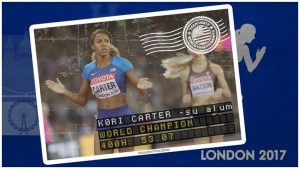 LONDON – American Kori Carter – who serves as a volunteer assistant coach on the Kentucky track and field staff and trains under UK head coach Edrick Floréal’s tutelage having competed collegiately for Stanford – won gold in the 400-meter hurdles at the IAAF World Championships on Thursday.
Carter’s gold was the second of these World Championships by a Lexington resident non-UK alum hurdler that now works with the current Wildcats and trains under Floréal’s direction.

“This whole year all my coach and I have been talking about is being world champion,” Carter said. “I could barely sleep last night because that’s all I was dreaming of. I just envisioned coming out on top so I think believing you can do it before it happens is really important.

“When you work so hard and sacrifice so much for something, for it to pay off in the end is so satisfying,”

Kentucky alumna Kendra Harrison’s – whose 100m hurdles world record a year ago perhaps helped inspire Carter and McLeod to move to Lexington — World Championships begin with the preliminary heats in her signature event on Friday.

“We’re trying to take over the hurdles one race at a time,” Carter said of the Floréal’s Kentucky elite training group. “I’m really proud of them. They push me every day in practice. They’re so inspiring.

“Mentally, they just help me be more confident. When you’re training with athletes of that caliber you have to rise to the occasion.”

Running in lane nine, Carter was one of the quickest out in the early portion of the race and couldn’t necessarily see her competitors’ positions (although a New York Times article from earlier this week would indicate she might’ve used the massive video boards above the turns inside London Stadium as a way of determining how the race was shaping up).

The U.S.’s reigning Olympic gold medalist Dalilah Muhammad led from hurdle one into the second turn, but Carter edged even over hurdle eight and pulled away down the home stretch winning in a convincing 53.07, the fastest time ever recorded by an athlete running in lane nine (per the IAAF report).

The performance was also the second fastest of Carter’s career. She ran a personal best 52.95 to confirm her place on Team USATF for these championships at the U.S. trials a few weeks ago. That American bronze time was the fastest she’d run since she set the collegiate record at 53.21 in an NCAA Championship performance for Stanford in 2013.

Floreal recruited Carter to Stanford, and worked with her until he took responsibility for Kentucky’s program in Summer 2012. Carter turned professional a few weeks after her NCAA title in 2013, and then trained in Los Angeles with a group including Allyson Felix the past few years before relocating to Lexington and reuniting with Floreal in autumn 2016. She placed fourth at the U.S. Olympic Trials – one spot behind incoming UK freshman Sydney McLaughlin – last summer.

“I love Coach Flo,” Carter said. “We’ve had a relationship farther back than most people know. He’s like my second dad. He pushes me every day to be better. I’m so blessed to have him.”

McLeod could feature in the 4x100m pool for Jamaica over the weekend. Kentucky’s Kayelle Clarke — the third leg on UK’s NCAA Champion 4x100m relay in June – is part of Trinidad and Tobago’s relay pool, after she medaled at the T&T Championships in June and raced in the World Championships 200m heats earlier this week.