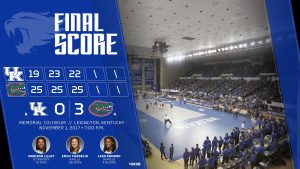 Edmond continues to shine with 16 kills in the match
LEXINGTON, Ky. – In a matchup featuring the two highest-rated Southeastern Conference teams in league history, the No. 4 Florida Gators prevailed by a 3-0 (25-19, 25-23, 25-22) margin over No. 6 Kentucky on Wednesday inside of Memorial Coliseum. The Big Blue Nation was electric as 5,329 fans – the largest in Memorial in the Craig Skinner era – came out to witness the showdown between the league’s top two teams. The loss snapped a 14-match winning streak for the Wildcats, which included taking down the Gators on their home floor a little more than two weeks ago.

“Florida played well tonight,” head coach Craig Skinner said.  “Our team was prepared. They were focused and very into the day’s routine and getting ready. They was absolutely no give up from our team after getting down 2-0. We got a lead and had a chance but Florida responded. Our team is tough and they certainly didn’t shy away from the moment.”

Kentucky falls to 19-3 overall and suffers its first loss within league play to move to 10-1. Florida improves to 19-1 and 11-1 against conference foes. The Gators’ lone loss on the season came at the hands of UK when UF was the country’s No. 1 ranked team.

UK returns to action on Sunday in a 1:30 p.m. ET tilt with South Carolina. The Gators assume a 0.5 match lead on the Wildcats in the league standings with tonight’s result, although they have played one more match than Kentucky within league competition.

In what was billed as one of the most highly anticipated matches across the country, the score was not indicative of the play on the floor. The teams were relatively even in most categories, with Florida benefiting from an efficient first frame offensively.

Sophomore outside hitter Leah Edmond continued to shine against the Gators, producing a match-high 16 kills. She’s had 16 or more in all three meetings with Florida in in her career. Edmond used an operative .424 hitting clip in the process. Senior Emily Franklin contributed six kills to the offensive cause.

Freshman setter Madison Lilley recorded a double-double with 27 assists and 12 digs. She also added two blocks and a kill. It’s the ninth double-double of her career.

Defensively, Ashley Dusek had a team-high 13 digs. Tonight’s loss was the first of the season with Dusek as UK’s starting libero this season. Junior McKenzie Watson had six digs, while freshman Gabby Curry totaled two.

Edmond and Franklin teamed up for a block for the match’s first point, but Florida quickly answered with a kill. Play rocked back-and-forth until the Gators benefited from a lucky ace that just nipped the top of the net to give the visitor’s a two-point edge at 5-3. The Gators stretched the lead to three before Skinner found a spot in the back left corner to snap the run. Three consecutive errors gave the Gators a 9-4 lead and UK opted for an early timeout. Out of the break, Florida capitalized on a quick set to increase the lead to six. Skinner’s second kill of the early going quelled the run. Franklin converted on an overpass, Florida committed a setting error, Brown and Mack posted a block and then the Gators were caught in the net again to propel UK to a 4-0 run and bring the home team back to within two at 12-10. Florida responded with two straight to gain a comfortable four-point edge once again. Kentucky got within two twice more, but each time Florida had a response. Kentucky took its second timeout trailing, 19-14. Florida would not allow the Wildcats to get any closer and claimed the opening frame by a 25-19 margin.

The Gators began the second stanza by winning the first point, but Franklin took advantage of a triple block being just a tad early on the timing and found a hole. After play swung back and forth, the Gators captured a three-point lead at 6-3. The Wildcats eventually clawed back and grabbed a one-point lead at 9-8 behind a spectacular Curry ace. Edmond followed with a crowd-pleasing solo rejection to shift the momentum to the home team’s side. Consecutive kills from Edmond and Brown lifted the Cats to a three-point advantage at 12-9, forcing the Gators into a timeout. The Gators continued to chip away at UK’s lead and eventually grabbed a lead of their own at 16-15. This time, Kentucky chose to take a timeout. Out of the break, Franklin drew a kill along the line to tie things once again. The teams would trade points until Florida shook free for three straight to take a 20-17 lead and Kentucky opted for a timeout. The Wildcats got to within two on four occasions, the latest at 24-22, and Florida took a timeout. Out of the break, Brooke Morgan was inserted into the lineup and immediately converted an overpass, but the Gators prevailed by a 25-23 score.

Edmond opened the scoring with a shot down the line in the third. Play seesawed from there until Edmond and Nyberg produced consecutive kills for a 5-3 lead. The Gators then committed an illegal attack to extend UK’s scoring. Florida fired back and tied it at seven. A kill from Franklin off the block, followed by an ace from Lilley and then an Edmond hammer enabled the Wildcats to again claim a multi-point lead at 10-7. Kentucky’s lead moved to four after a kill from Edmond at 13-9. Florida managed a three-point spurt to pull to within one at 15-14, forcing Kentucky into a timeout. Nyberg came up with a kill following the break, but Florida would not go away and tied it at 17. The Gators eventually earned a lead at 19-18. Florida would stretch the advantage to two at 22-20. Kentucky opted to take its final timeout. Edmond crushed a shot to pull the Cats back to within one, but Florida again answered. It was all the more room the Gators would need as they prevailed 25-22 for the set win.