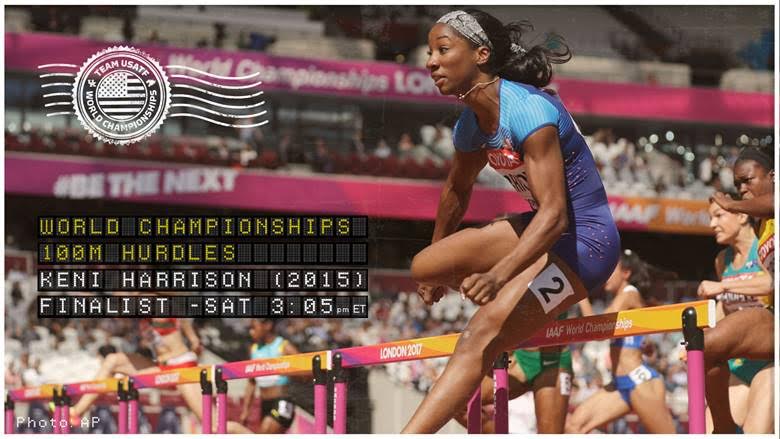 Class of 2015 Wildcat to run at 3:05 p.m. ET Saturday
Live Results/Timetable | American Broadcast Listings
LONDON – Kentucky alumna Kendra Harrison advanced to her first IAAF World Championships final in the 100-meter hurdles at London Stadium on Friday.
The road to the final was paved with some unanticipated peril, but perhaps as a sign of how far Harrison has come in her still young professional career, the two-time NCAA Champion found a way to overcome.

The field had to be recalled to the blocks upon the first start gun firing, but a green card was issued to the field. On the restart, Harrison got out of the blocks well, but then flew into the first hurdle. She did well to stay in contention, and finished third in semifinal three with a 12.86 time to qualify as the second non-automatic qualifier by just a 0.01-second margin.

“I can’t worry about one performance,” Harrison said. “I think that first little hiccup threw me off, but I just tried to make it through. I’m excited for the final. It’s my first one, and I’m ready to come out here and get the job done.”

Harrison’s Championships opener on Friday was a smoother trip as she was fastest qualifier in the preliminary heats winning the third prelim in 12.60Q (-0.6).

Harrison will run out of lane three in the final, which is scheduled for 3:05 p.m. ET on Saturday. That race will fall in the NBC live broadcast window.

“I love training with Omar and Kori,” Harrison explained. “We push each other. We all have high standards. We like to reach our goals and to have such a strong group of teammates is why we’re successful.

“Watching them run and get their jobs done is inspiration for me to go out there and do what I know I can.”

At the semifinal stage of the last IAAF World Championships in Beijing 2015, Harrison was disqualified for a false start. She placed eighth in the final at the 2016 World Indoor Championships after hitting a hurdle early on.

She famously placed sixth at the United States Olympic Trials last summer, missing a spot on Team USATF for the Rio Games weeks after breaking the American record at the same track in Oregon. Harrison followed up the trials disappointment by breaking the world record running a time of 12.20 at the Diamond League Anniversary Games inside London Stadium two weeks later.

McLeod could feature in the 4x100m pool for Jamaica on Saturday. Kentucky’s Kayelle Clarke — the third leg on UK’s NCAA Champion 4x100m relay in June – is part of Trinidad and Tobago’s relay pool, after she medaled at the T&T Championships in June and raced in the World Championships 200m heats earlier this week.