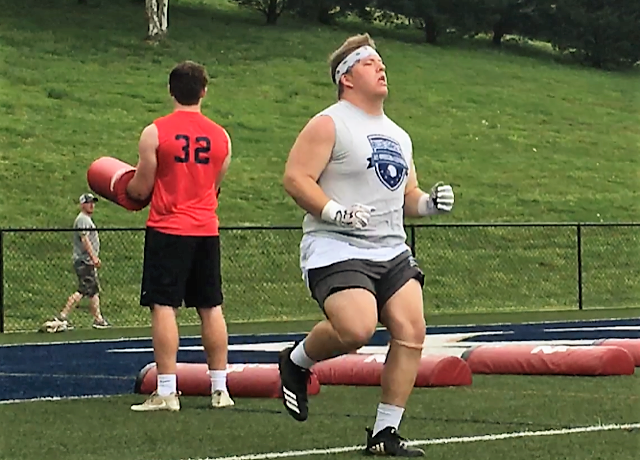 An author named Cindy Skaggs, in a book she entitled Fight By The Team once wrote that “A tank might be dangerous, but only if you got in its way.” There have been offensive linemen all over the commonwealth of Kentucky who have seen, first hand, the wisdom of this particular truism.

William Long, Class of 2021, is, by all accounts, a tank. Whether it is his compact but explosive 5-10, 260-pound build; his 405-pound bench press; or his 600-pound squat; the former offensive center, now defensive lineman-fullback is a regular wrecking ball of muscle, bone, and sinew.

William Long has been absolutely tearing it up on the combine circuit so far this Spring/Summer. He was invited to the Appalachia Prep Combine in White Sulphur Springs, West Virginia where he was picked the 8th best DL prospect in the Appalachia region (preseason, 2019). He was invited to the Tennessee Regional of the Blue-Grey All-American Combine where he just recently learned of his selection to the Super Regional to be held at the NFL Hall of Fame in Canton, Ohio. He attended the Elite-3 Foundation’s Tennessee Mega-camp where he made the camp’s showcase as one of the two best defensive linemen on hand. He just got back from Kentucky Wesleyan’s prospect camp, in Owensboro, KY, where it is being reported he (once again) put on a dominant performance.

The kid has shown out everywhere he’s been. Now critics of Long love to say, “Yeah, he’s strong but does his strength translate to the football field?” That seems like a question with a rather obvious answer.

First, Long who is relocating with his family, owing to his parents’ getting jobs elsewhere, started 25 consecutive football games on Hopkinsville High School’s varsity. William Long, who will only be a Junior in 2019, has never watched a varsity football game from the sidelines. He was a day-one, snap-one, starter.

We talked to J.T. Powell, the Director of the prestigious Appalachia Prep Combine about William Long and he related “…The staff at the APC was impressed with the Kentucky talent and William Long really stood out and caught the staff’s full attention. William tested as being extraordinarily powerful, explosive, and quick. We also were a little taken aback at his deceptive speed. He is a kid we could see being deployed along the Defensive Line, where he competed at our combine, but also offensively at either H-back or full-back.”

William is an exceedingly polite and well spoken kid who carries a 3.571 GPA on a 4.0 scale and has made a 26 on a recent ACT practicum. William is set to take the exam for real this coming April as a Junior. In and of himself, William isn’t dangerous, but like a tank, he becomes dangerous only for those who get in his way.

This kid is a stud and warrants watching by all the big boys!!