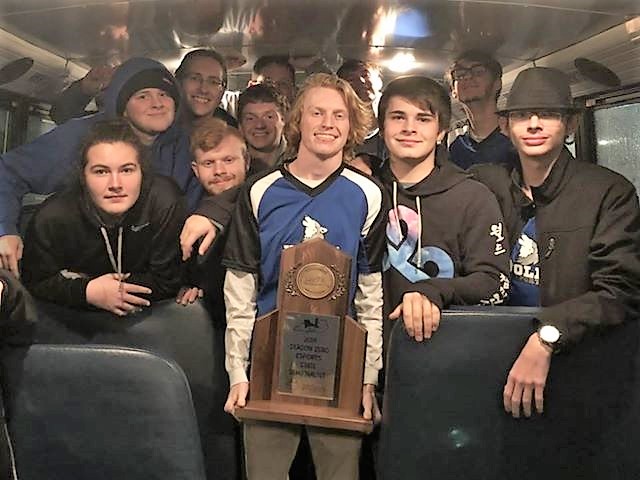 Wolves Blue on a Roll

Esports has made its way to Eastern Kentucky! At Wolfe County High School, the Esports team is currently ranked #1 in the state of Kentucky. The team, named Wolves Blue, has had a tremendous season with a current record of 12-2 and are looking to make a run in the KHSAA state playoffs in a few weeks.

The Wolfe County High School esports team is making a name for themselves as they continue to get local and state attention as their talents are becoming more well known. Wolves Blue has been scouted and visited by several college coaches and scouts, and have visited the University of Pikeville and seen what it takes to be a collegiate esports competitor.

Competing for the Wolves Blue are three seniors: Cody Sargent, Jarrett White, and Brendan Bush; and two juniors: Jeremey McKinney and Cameron Caskey. The matches are streamed live on YouTube every week under “Wolfe County Wolves Esports” and have been featured in multiple newspapers including a mention in the Lexington Herald Leader.

After officially sanctioning esports as an official sport in the fall of 2018, Wolfe County High School teacher Timothy Evans began building a team of players. They would be playing the game League of Legends on PC. League of Legends is a fast-paced, competitive online game that blends the speed and intensity of an RTS with RPG elements. Two teams of powerful champions, each with a unique design and playstyle, battle head-to-head across multiple battlefields and game modes. With an ever-expanding roster of champions, frequent updates and a thriving tournament scene, League of Legends offers endless replay-ability for players of every skill level.

E-sports officially stands for electronic sports, not to be confused with video games, because it’s much more than that. What sets it apart is the level of organized competitive game play between teams and it’s own strict set of rules and guidelines. E-sports is about teamwork, communication, strategic thinking and leadership — in all the same ways that traditional sports are and then some.

Today, E-Sports is growing exponentially with 400 million fans worldwide who repeatedly pack out arenas. A recent survey shows that 72% of American teens play video games regularly. Currently, there are 200 colleges and universities offering almost 10 million dollars in scholarships. Establishing E-Sports in high school enables students to do what they love and provides them with additional opportunities to earn scholastic recognition. Colleges in Kentucky that currently offer E-Sports include: Western Kentucky University, University of Pikeville, Campbellsville University, and Brescia University.

Last season Wolfe County was able to compete with two teams: Wolves White and Wolves Blue. Wolves White finished the regular season with a 4-8 record and qualified for the state playoffs but came up short in the first round. Wolves Blue finished the regular season with an incredible 12-0 undefeated record. They were one of only 4 schools in the country to go undefeated in the inaugural season (5 states competed last season)!

Wolves Blue made a great run in the state playoffs but came up short in the semi-finals falling to St. Henry High School from Erlanger. The team traveled to Martha Layne Collins High School in Shelbyville to receive the KHSAA semi-finalist trophy on January 28th. Reaching the final four in the very first KHSAA state playoffs is such an accomplishment; one that these students will never forget.

This season WCHS had enough participants to form 4 teams: Wolves Blue, Wolves White, Wolves Black, and a Rocket League team called Rocket Wolves. As we look to end the season on a strong note, you can keep up the Wolfe teams and watch future matches live on our YouTube channel “Wolfe County Wolves esports”. Go Wolves!