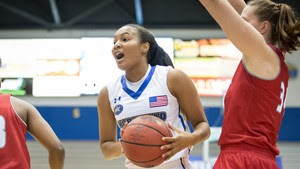 MOREHEAD, Ky. – Morehead State women’s basketball (4-2) bounced back from its first road test of the season with a 63-55 victory over Chicago State (0-5) on Saturday afternoon at Johnson Arena.
“We did some good things,” said head coach Greg Todd. “We played hard against a well-coached team.”

The Eagles were led by junior forward Eriel McKee, who posted her second double-double output in three games. The 5-foot-10 Lawrenceburg, Ky. native dropped 16 points and 13 rebounds, marking her second straight performance of at least 12 boards.

“Eriel fights every possession for rebounds,” Todd said. “She’s in a good groove right now, and playing very well for us.”

Morehead State held Chicago State to just 35 percent shooting from the field, and outrebounded the Cougars 42-35. The Eagles made their living in the paint today, where they won a 42-20 scoring battle.