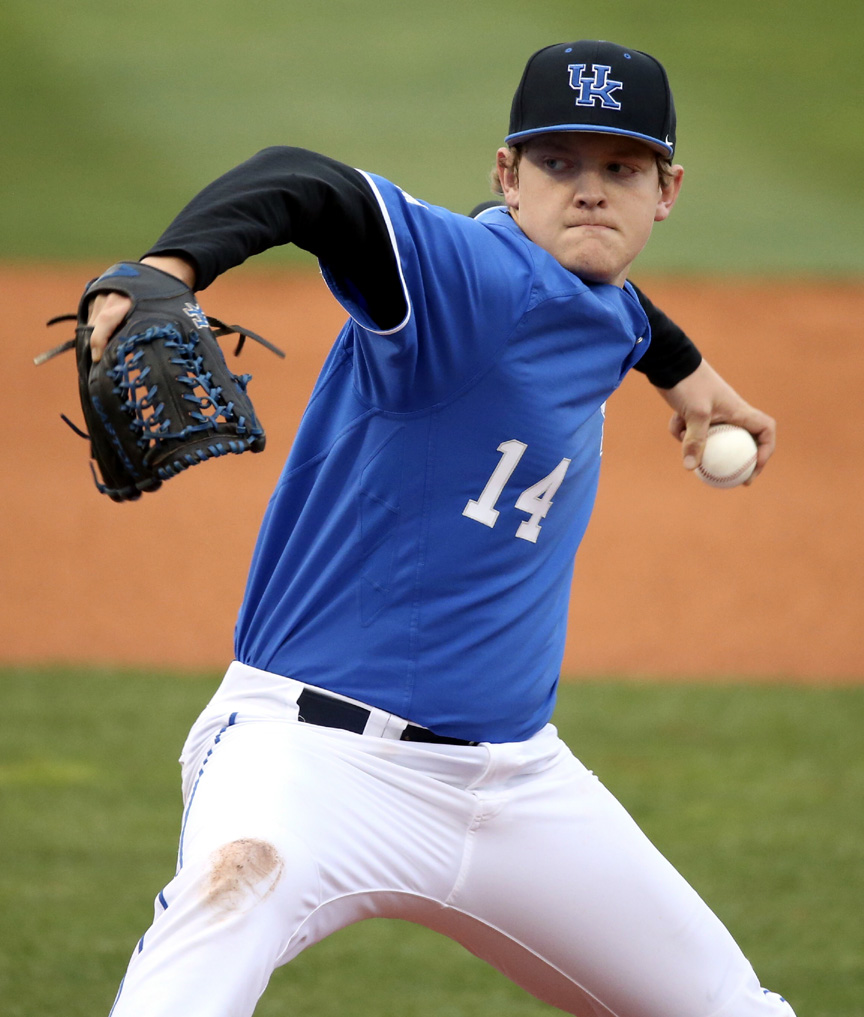 The Cats picked up their 30th win of the season and improved to 11-12 in Southeastern Conference play, keeping themselves in good position in the league race.

Making his first start since Mar. 10, Thompson was untouchable, not giving up and striking out seven in his three innings of work. He walked a pair but pumped fastballs by the Volunteers’ bats, recording two strikeouts in each of the first two innings before sitting the side down on strikes in the third inning.

e Becker and Troy Squires each hit three-run homers on a night the wind was blowing in at a steady clip. Becker’s blast broke a 1-1 tie in the sixth inning, clearing the picnic area beyond the left field wall on the opposite field shot. Squires put the game on ice with his bomb to right field in the eighth inning.

Zach Haake earned the win with clutch work in the fifth inning. He entered in the fifth inning with the bases loaded and no outs, coaxing a ground ball force out at home, an infield pop-up and a fly ball to left around a walk, holding the Vols to just one run.

After Becker’s home run gave the Cats a 4-1 lead the Vols pushed two runs across in the bottom half of the inning, using a walk and three hit batters along the way. Machamer, the Cats’ closer, entered and got the final out of the inning as part of his 2.1 scoreless innings.

With SEC Tournament positioning still very much on the line, the teams will meet Sunday looking for a series win. First pitch will be at 1 p.m. ET with the game will be streamed on the SEC Network+ and can be heard on the radio at 630 AM WLAP.

Bottom 6th – Andre Lipcius walked and Brodie Leftridge was hit by pitch. Both runners moved up on a wild pitch. Russell grounded out to 3B, scoring Lipcius. Santiago hit a ground rule double to LCF, scoring Leftridge. UK 4, UT 3.

o   Junior C/1B Kole Cottam has reached safely in 16 straight games, has hits in 20 of the past 22 games and is riding a career-long nine-game hit streak.

o   Junior INF Trey Dawson has now reached base safely in 16 of his last 17 games.

o   Senior INF/OF Luke Heyer has reached in nine straight games and 14 of the last 15 games.

o   It was his fifth home run of the season and sixth career blast.

o   Squires now has 49 RBI on the season. He had 37 total RBI his first three seasons.

o   It was his sixth home run of the season and 14th of his career.

o   Becker now has five multi-RBI games this season and 15 for his career.

o   Pompey connected for his 13th double of the season.

o   It was Pompey’s 13th multi-hit game this season and 47th of his career.

o   Heyer now has 18 multi-hit games this season and 22 for his career.

o   Thompson did not allow a hit and struck out seven in 3.0 innings.

o   The lefty is averaging 11.84 strikeouts per nine innings for his career.