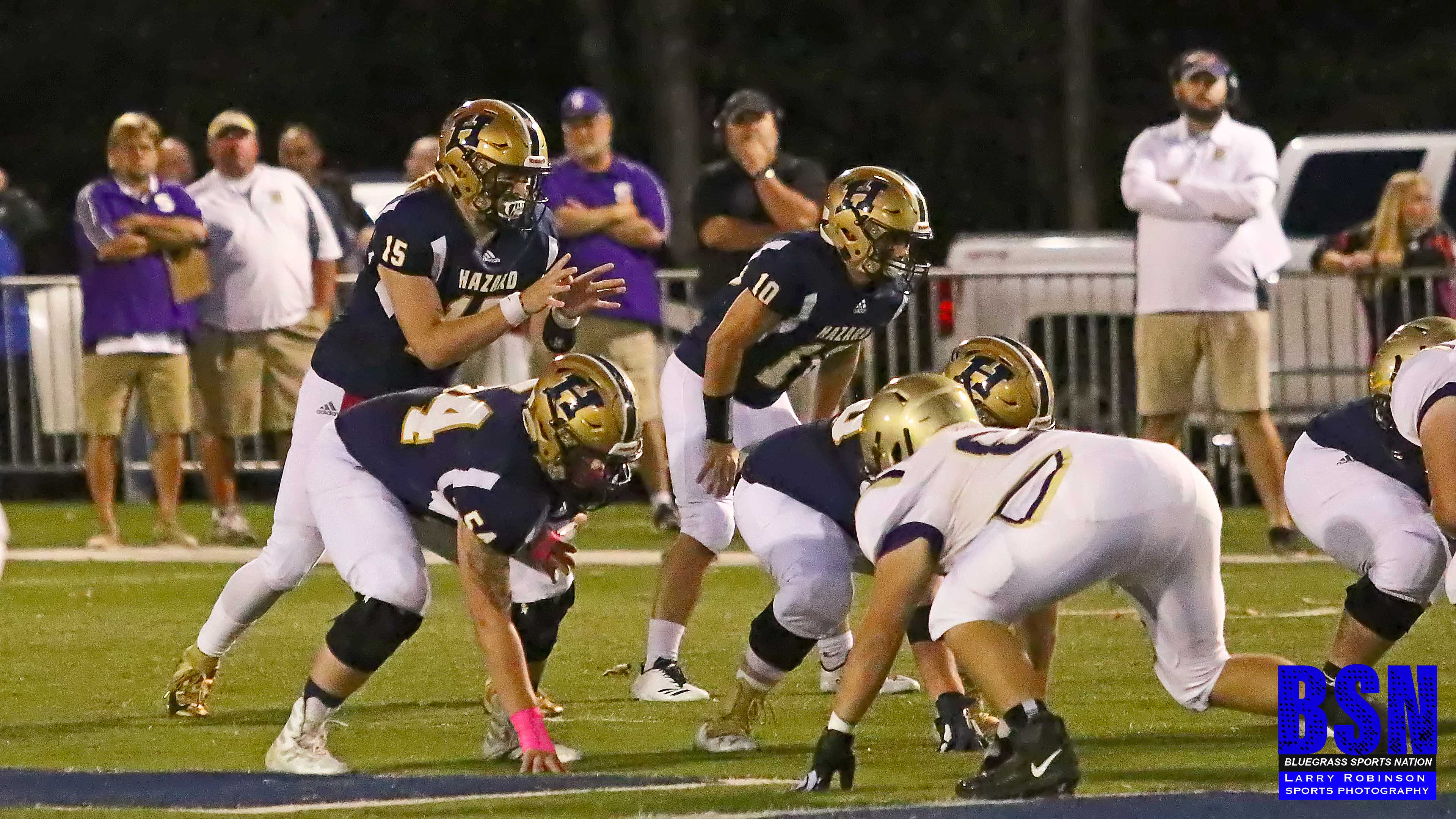 The game of the week for the state of Kentucky held up to it’s hype and billing. The Bulldogs and Briarjumpers went toe to toe in a four quarter slug fest on Hazard’s Daniel Field Friday night. Somerset is 20-7 all time against the Bulldogs and if the Bulldogs were to make up any ground this year, it would take a near perfect game against one of the most highly touted teams in the state, regardless of class. It was not to be this year for the Bulldogs.

The game started as a defensive war for most of the first half. Each team feeling each other out and trying to exploit the others weaknesses. The problem was, each team had very few! The first quarter consisted of only 2 possessions by the Bulldogs and 1 by the Briarjumpers as both teams’ defense would bend and not break as they ran the ball and mounted drives that would stall. The Bulldogs got something going after a huge Trajon Campbell interception midway through the 2nd. The Bulldogs drove down to the Briarjumper 30 when the turnover bug hit them and Somerset was able to jump on a fumbled exchange. The Bulldogs were able to force a three and out and had the ball on the right side of the field. Their drive stalled and Hazard sent the Bulldog field goal squad onto the field for the try from 39 yards. After a couple of false starts moved the Bulldogs back 10 yards, Jonah Helm would put them on the board first when he boomed a 49 yard field goal through the uprights to give Hazard a 3-0 lead with just :55 seconds left in the first half. The Bulldog defense was solid and would hold the Somerset offense scoreless for 23:59.6 seconds of the first half. The problem? Hazard left Kentucky recruit Keiya Sheron .4 of a second and he was able to avoid the Bulldog’s relentless pass rush and find his receiver in the back of the end zone with no time left on the clock and set the halftime score at 7-3, Somerset.

The Bulldogs had to gather themselves and regroup quickly because the Bunnies would be receiving the ball to start the second half. After forcing a 3 and out, the Bulldogs offense drove down the field on a 12 play, 75 yard drive and Reece Fletcher found the end zone on a sweep that allowed Hazard to regain the lead, 9-7 after a missed PAT. The Bulldogs would kick off, hold the Jumpers to another 3 and out, and then another turnover hit the Dogs at the worst time when their punt return team muffed the punt and the Briarjumpers were able to recover. Somerset was able to make the Bulldogs pay as they would score 7 plays later putting them back up 13-9 after a missed 2 point conversion. After a Hazard turnover on downs, the Somerset offense was forced into another punting situation at 4th and 14 when the call of the night went the Jumper’s special teams coordinator with a perfectly executed fake that caught the Dogs off-guard and let the Somerset punter scramble 40 yards to the end zone. This would set the final score of the night at 21-9 after a two point conversion was good by the Jumpers.

It was a great night of football! Hazard, who had many questions entering the season, has made steady improvements each week and are now competing at a high level. Is that level high enough to compete with the top of 1A? We get to find out in two weeks when the Pikeville Panthers roll into town. This game will have big home field playoff implications and should be just as anticipated as the Somerset game was. The Bulldogs will essentially have an open week after the forfeit of Jenkins this coming week. This should allow the Dogs to heal up some bumps and bruises from the last few weeks’ physical games and have a little extra preparation time for the Panthers. Be sure to check back in with BluegrassSportsNation.com daily for updated high school, college, and professional sports photos and articles with the best coverage of your local high school athletes.