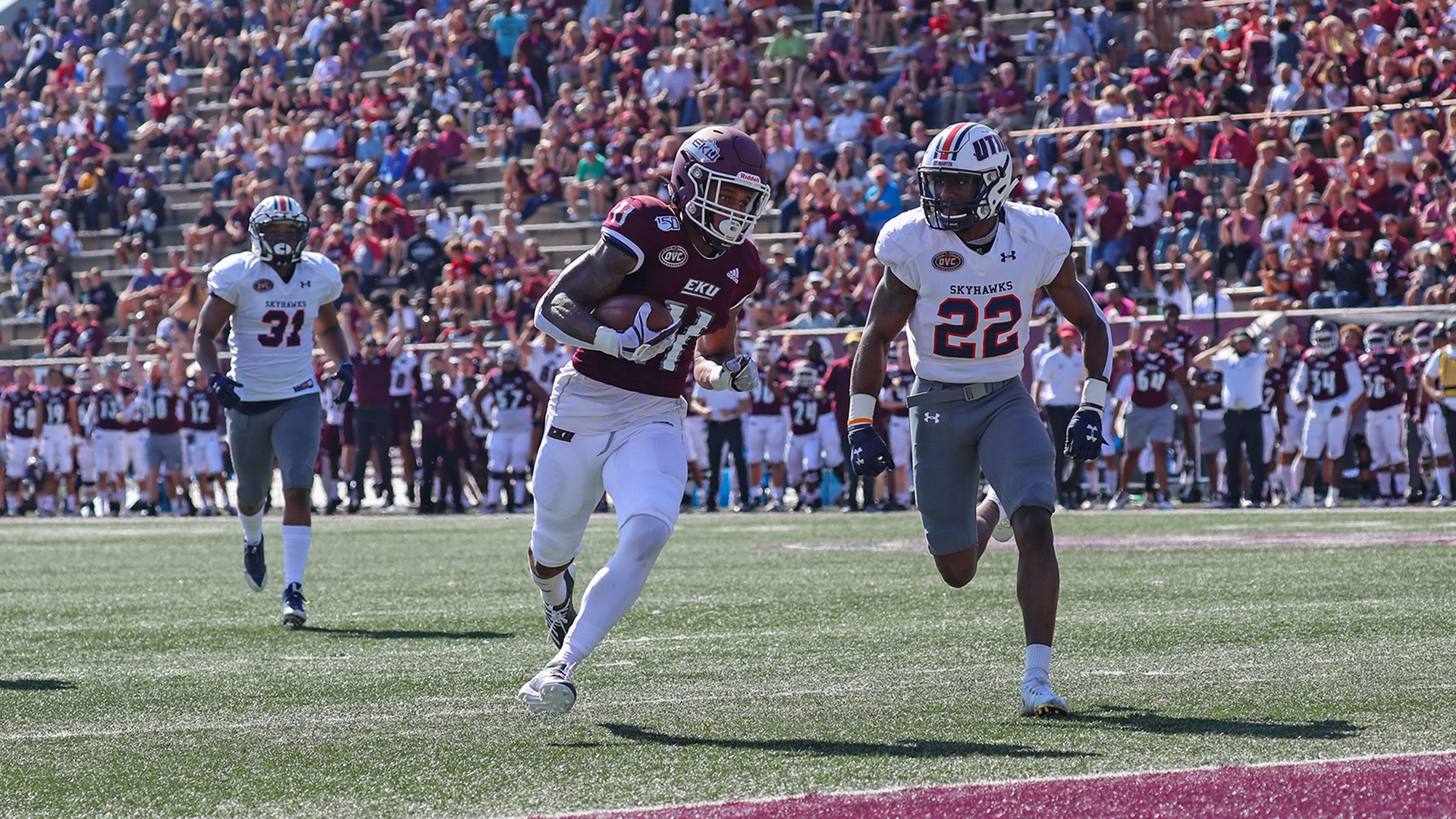 RICHMOND, Ky. – Eastern Kentucky University’s football team overcame a 10-point deficit and took the lead in the third quarter, but two touchdowns in a span of two minutes sent the University of Tennessee at Martin to a 38-28 victory over the Colonels on Homecoming Saturday at Roy Kidd Stadium.

EKU completed its comeback from down 17-7 when Alonzo Booth’s touchdown made it 21-17 in favor of the home squad with 9:01 to play in the third quarter.  The Skyhawks stole the momentum, and the lead, with two touchdowns in a period of two minutes and 11 seconds.

A 77-yard punt return by Terry Williams set up a go-ahead UTM 5-yard touchdown run by quarterback John Bachus with 4:59 on the clock.  A 44-yard fumble return for a touchdown by TJ Jefferson with 2:48 left in the third gave the Skyhawks another 10-point lead, 31-21.

Eastern drew within three, 31-28, on a 5-yard touchdown run by Parker McKinney with 13:20 left in the game, but UT Martin came right back and scored on a 54-yard run along the left side by Peyton Logan with 10:44 to go.

EKU got on the board quickly, taking the opening kickoff and driving 48 yards in three plays to go on top 7-0.  The scoring opportunity was set up by a 44-yard kick return by freshman Quentin Pringle.  After Daryl McCleskey Jr. picked up three yards on the ground, McKinney went to the air and found tight end Ethan Bradds for 18 yards.  On the next play, McKinney connected with Jaelin Carter over the middle in the end zone from 27 yards away with 13:52 left in the opening quarter.

The Skyhawks, however, scored 17 unanswered.  Lamarcus Young found the end zone on a 41-yard run with 3:39 left in the first to tie the game 7-7.  Ryan Courtright made a 22-yard field goal at the 6:07 mark of the second.  Jaimiee Bowe’s 9-yard touchdown run with just 1:27 left in the first half put the visitors in front 17-7.

It appeared the Colonels were going to go 3-and-out on the ensuing possession, giving UTM another chance to score in the first half, or sit on the ball until opening the third quarter with possession.  After a 3rd-and-8 rush didn’t gain any ground, UT Martin was called for unsportsmanlike conduct to give EKU a 1st-and-10 at its own 36 yard line.  On the next play, McKinney hooked up with a leaping Keyion Dixon for 43 yards down the right sideline.  Five plays later, McKinney hit McCleskey out of the backfield for six.  The extra-point made it 17-14 in favor of the Skyhawks with 17 seconds remaining in the quarter.

Eastern Kentucky then forced a 3-and-out to start the third quarter and McKinney went to work again on a go-ahead scoring drive.  McCleskey got it started with a 19-yard run.  On a 3rd-and-8 play, McKinney completed a pass to Dixon for 14 yards to midfield.  Three plays later he connected with Jerome Gross for 18 to the UTM 25.  The redshirt freshman QB then gained 24 yards on two runs.  Booth capped the 10-play, 85-yard drive with a 1-yard touchdown run.  The point-after completed the comeback, putting EKU in front 21-17.

McKinney finished the game with 313 yards and two touchdowns through the air. Dixon was the Colonels’ leading receiver on the day, pulling in five catches for 97 yards. McCleskey Jr. paced the EKU ground attack with 60 yards on 17 attempts.

On the defensive end, Corey Glass led all players in the game with 11 tackles, including 1.5 for loss.

The Colonels will be off next weekend.  EKU returns to game action on Oct. 19 at Murray State.  Kickoff is scheduled for 3 p.m. ET.