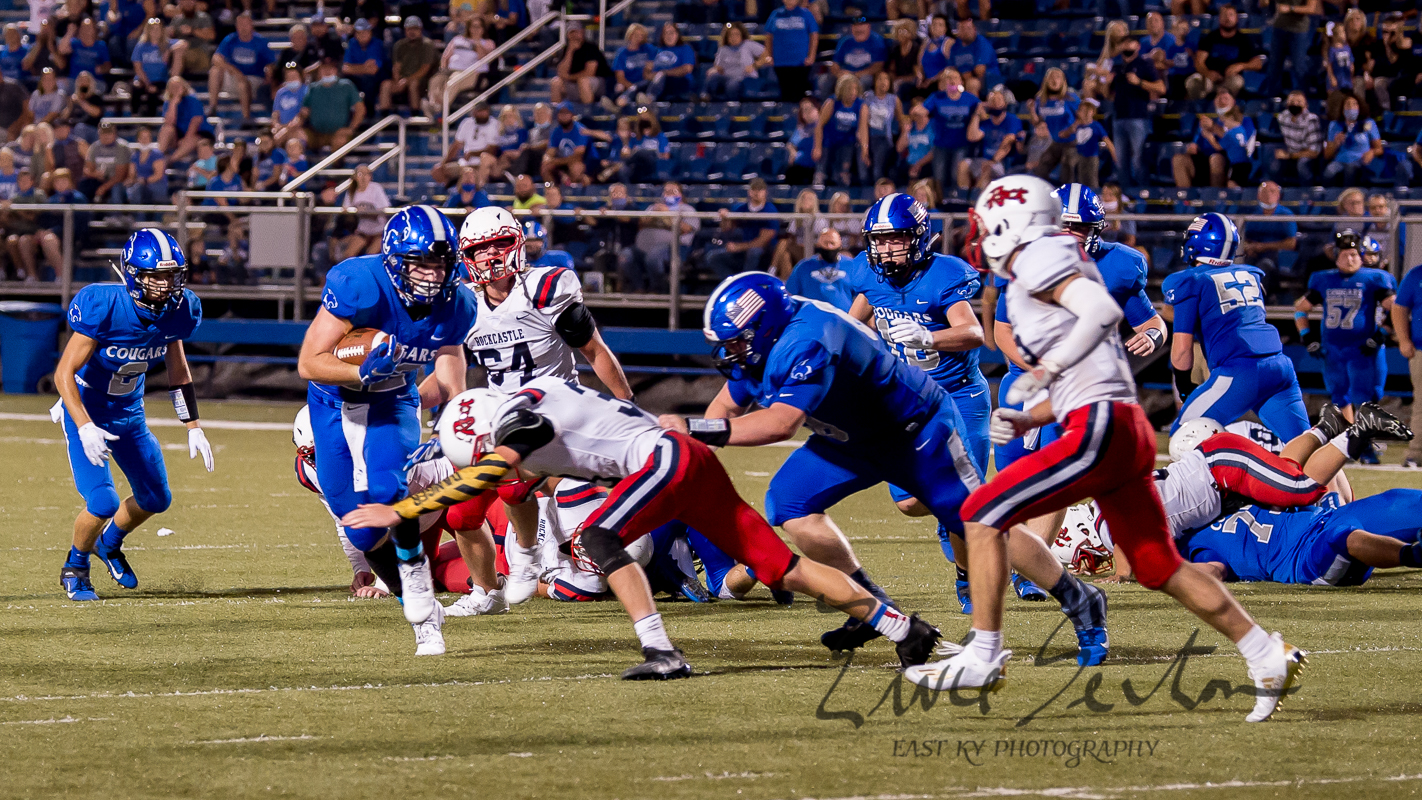 The Letcher County Central Cougars and The Rockcastle County Rockets squared off in Whitesburg to open up the season 2020 High School Football season. Rockcastle was able to get on the board first with a safety to take lead 2-0 with 9:26 remaining in the first quarter. Turnovers by Rockcastle County stalled any type of offensive momentum for the Rockets. Letcher Central still struggled to get any offense going in the early part of the second quarter, but the defense remained strong. After building momentum throughout the second quarter Letcher Central Quarterback Carson Adams was able to score in Rocket territory from one yard out. Adams connected with Alex Blair on a two point conversion with 2:53 remaining until halftime. Letcher would get all the way to the seven yard line on fourth and goal. The cougars tried to extend the lead but the field goal was missed by Jonah Little which kept the score 8-2 Letcher Central at halftime. A ton of errors and miscommunication cost both teams more points in the first half. In the third quarter both teams started to shake the rust off and started building momentum.

The Cougars had the ball to start the third quarter but was unable to get anything going. The biggest play in the third quarter was on a thirty-three yard touchdown pass when Carson Adams connected with Trevor Branham, Sam little added the extra point to make it 15-2 with 52.1 reaming in the third quarter and that would be the lead after three quarters. In the fourth quarter Matthew Chasteen would score right up the middle to right side of a field for a 65 yard touchdown run with 11:50 remaining in the game. Two point conversion attempt was no good. Letcher went a quick three and out. The Rockets were building momentum with a third and long from their own thirty-three. The Rockets were unable to complete the pass, and had to punt it back to the Cougars. The Cougars were able to add two more scores in the fourth quarter. Isaac Matthews scored from twenty-four yards with 10:16 remaining in the game, but the two point conversion was no good and that left the score at 21-8. Carson Adams scored from seven yards out with two minutes remaining with the two point conversion being unsuccessful making the score 27-8, and that would be the final score with the Cougars starting the 2020 season off with a 1-0 record. Rockcastle County falls to 0-1 and will host Adair County. Next week the Cougars look to go to 2-0 as they welcome the Hawks of Pike Central (0-1) to Whitesburg. Pike Central is coming off of a 37-23 defeat of Perry County Central. Last year the Letcher Central Cougars fell short to Pike Central on the road, 40-35.

1st QUARTER: It was a rough start for both teams. Letcher held strong on the first defensive possession of the game. After a solid punt by the Rockets, Letcher ran a draw play for the Hayden Brashear which caused a six yard loss and resulted in a safety. That gave The Rockets the 2-0 lead. Rockcastle gained momentum and looked to be going up 8-0 until a fumble at the Letcher 35 yard line. Letcher recovered the fumble on their own thirty. Letcher could not get anything going and punted it back to the Rockets. A few plays later Quarterback Nathan Parkey threw an interception that was picked off by Kaden Barnett. The Cougars could not capitalize on the turnover and the score remained 2-0 after the first quarter.

2nd QUARTER: The Second Quarter saw more of the same from both teams until about midway through the second quarter when Carson Adams scored on a quarterback sneak from the Rockcastle one yard line. The Cougars went for two and Adams connected with receiver Alex Blair on the two point conversion to give The Cougars the 8-2 lead with 2:53 remaining in the first half. That would remain the score until halftime. The Rocket coughed up one more fumble in the second quarter giving them three turnovers alone in the first half. Letcher Central had a chance to go up 15-2 at halftime, but instead decided to go for a 24 yard field goal attempt that was wide right.

3rd QUARTER: Letcher Central started the second half with the ball and the run game picked up. Letcher moved the ball and was able to score on a thirty-three yard touchdown pass from Carson Adams to Trevor Branham to extend the lead with the extra point by Jonah Little made it 15-2 . Letcher Central’s defense would stop the Rockets throughout the third quarter and held on to the thirteen point lead. Rockcastle County picked off Letcher Central in the third quarter when Carson Adams threw up a pass on the scramble.

4th QUARTER:   Rockcastle County started to pick up serious momentum at the end of the third quarter that continued to the fourth quarter. Matthew Chasteen took it up the middle and to the left and scored on a 65 yard touchdown run with 11:50 left in the game. Rockcastle decided to go for the two point conversion but it was unsuccessful and the scored remained 15-8. Letcher was had the ball for just a little over two minutes and Rockcastle got the ball back. It was third and sixteen, Rockcastle went for a long pass and the pass came up just a little short, but without some controversy. After that the Rockets punted the ball and it was bad punt that gave Letcher Central great field position. On the drive Isaac Mathews scored from 24 yards out with 10:16 left in the fourth quarter. The two point conversion attempt was unsuccessful making it 21-8 Letcher Central. Rockcastle was not able to much more on offence as the Cougars forced a fumble recovered by Dakota Hall with 6:34 remaining in the game. Carson Adams would score on a 7 yard touchdown with two minutes remaining in the game. The two point conversion was unsuccessful and that made the score 27-8 which ended up being the final score.