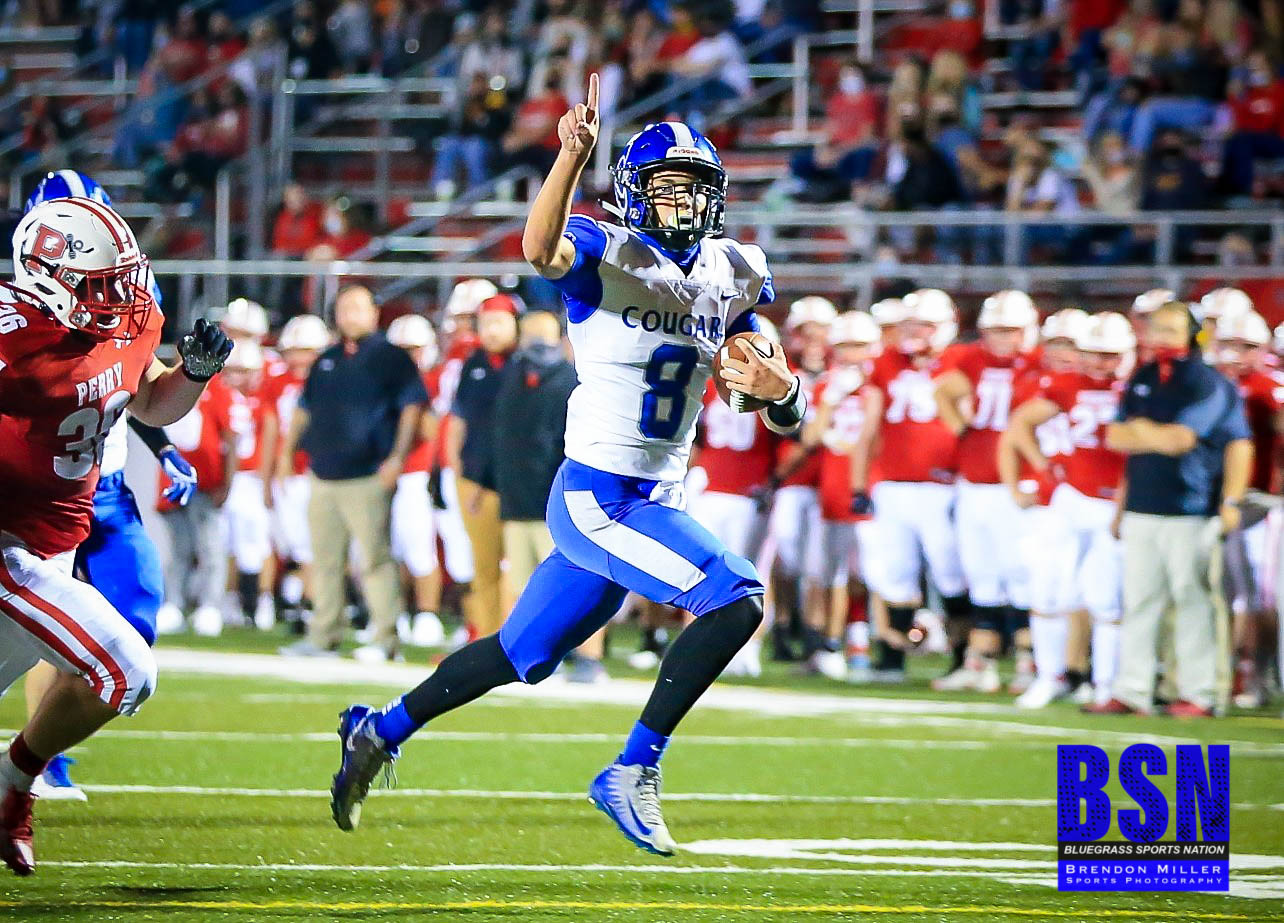 Cougars grind out a 28-7 win over the Commodores

The Letcher County Central Cougars traveled to Hazard to take on the Perry Central Commodores looking to build momentum on an early 2-0 start to the season. Letcher began Class 4A District 8 play after opening wins against Rockcastle County and Pike Central. The Cougars found balance on both sides of the ball on the night scoring both through the air and on the ground, and slowing the Perry Central attack.

Letcher received the opening kickoff and began the open drive from their own 47. The Cougars moved the ball effectively into the red-zone. Carson Adams connected with Reece Barnette for an 18-yd touchdown pass on a great catch in the back of the endzone to open the scoring. The extra point attempt by Jonah Little was wide right which left the score at 6-0 Cougars. In the opeing drive, the Cougars overcame multiple penalties to take the lead, which would become a common theme on the evening.

The Commodores were unable to move the ball on their first possession against a stout Letcher Central defense led by Senior Defensive Lineman Jepatha Griffith. Letcher gained great field position, but Alex Blair fumbled the ball with 4:14 remaining in the opening quarter forced by Perry freshman linebacker Hunter Griffie. Samuel Spencer recovered the ball for the Commodores around their own 46 yard-line.

A few plays later Perry would turn the back back over to the Cougars as Koby Barnette picked off Perry Central’s Chanse McKenzie at the Letcher 45.

McKenzie finished the game passing for 25 yards connecting on 5 of 13 passes. Following the interception, Letcher was forced to punt, and the Commodores moved the ball down to the red-zone. Perry was unable to convert on 3rd and 6 from the 11, and a false start penalty pushed the ball back to the 16 making it 4th and 11. McKenzie feeling pressure threw the ball towards the right side of the end-zone which fell incomplete. After the first quarter of Letcher Central lead 6-0.

The Second Quarter started off the with the air attack for the Cougars! Carson Adams hooked up with a pass to Sam Little from 31 yards out for the score. The Two point conversion attempt by Adams was no good and the Cougars led the Commodores 12-0 with 11:22 remaining until Halftime.

The Cougars executed an onside kick and Wyatt Ison of the Cougars recovered the ball with 11:18 remaining in the half. Penalties stalled the drive for the Cougars and they were forced to punt. The Cougar defense was again strong and the Commodores again had to punt.

The Cougars would take the ball and drive down the field behind a big run by Hayden Brasher and a Carson Adams run on 4th and 1 from the Commodore 37. Brasher finshed the drive would score from 23 yards out and get the two point conversion as well with 2:13 remaining to make it 20-0 and that would be the score at halftime.

The Commodores made adjustments on offense to start the second half. Moving the ball with the run game starting the early parts of the drive, Charles Mullins would start to air it out and connect on short passes. Perry made it to the Cougar 20 and were stopped on 4th and 5 by an incomplete pass from Charles Mullins with 8:11 remained in the third quarter. The Cougars were again hampered by penalties, and punted back to the Commodores.

Perry then drive to the red zone and Mullins connected on a 9 yard touchdown pass to Mason McAlarnis.

In the fourth quarter, both teams traded defensive blows with Perry having an opportunity midway through the fourth quarter to take it the house from 72 yards out, but McKenzie’s pass to Cade Miller was incomplete and forced another Commodore punt.

From there the Cougars were able to eat the clock on the ground and Adams scored on a quarterback keeper with 42 seconds remaining in the game. Brashear added to the score on a two-point conversion making the score 28-7.