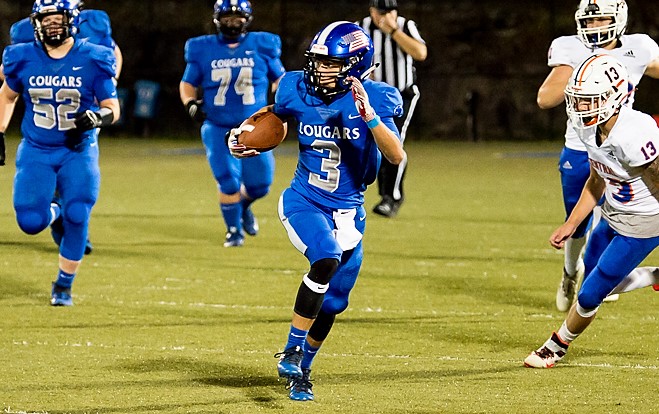 After Letcher Central struggled on offense last week against Rockcastle County in the season opener at home, the cougars would rattle off 52 straight points to defeat Pike Central 52-15 at Cougar field.

Pike Central took the lead early from a Cougar turnover on the opening kickoff. Tayvian Boykins would score from two yards out with 8:17 remaining in the first quarter while Aaron Slone added the extra point to give the Hawks the early 7-0 lead.

Carson Adams threw for 70 yards and one touchdown connecting early with Luke Goins from 16 yards out in the first quarter with 5:58 on the clock, Jonah Little tied the game at 7 adding the extra point.

Adams would also take it to the house in the first quarter for an 85 yard touchdown and add the two-point conversion to give the Cougars their first lead of the game, 15-7. That would remain the score after one quarter.

Adams would add a seven yard touchdown run and two-point conversion with 7:02 remaining until halftime to give the Cougars the 23-7 lead.

The Letcher Central defense kept the Hawks off the field with a fumble late in the first half, the Cougars were also able to force another fumble on the Hawks in the second Quarter giving the turnover category at halftime with Pike Central at two and Letcher Central at one.

The Offensive storm took off for the Cougars in the third quarter as the Cougars outscored the Hawks 29-0 with scores from Hayden Brashear from eight yards out with 10:02 remaining to make it 30-7.

Letcher’s defense stopped the Hawks again and Sam Little took it to the house on a 67 yard punt return, while Carson Adams added the two-point conversion to make it 38-7.

Eric Perez would score for the Hawks with 2:54 reaming in the fourth quarter and get the two-point conversion making the final score 52-15.

Both the offense and the defense for Letcher Central came ready to play and will now travel on the road next week to open up District play to take on the Perry County Central Commodores. The 2-0 start for the Cougars marks the first time the Cougars have started the season 2-0 since 2014.