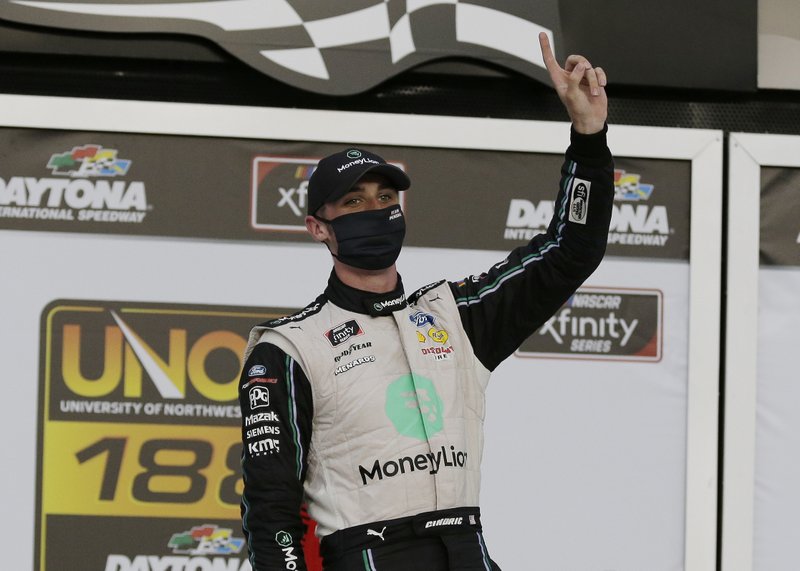 History was made at Daytona International Speedway Saturday, as the first of three NASCAR national series made its debut on the iconic DAYTONA Road Course with the running of the NASCAR Xfinity Series UNOH 188.

It was only appropriate that the race winner – Austin Cindric – made history himself. In addition to claiming victory in the first Xfinity Series race on the 14-turn, 3.61-mile layout, he won for the fifth time in the last six races, joining Sam Ard (1983) as the only NASCAR Xfinity Series drivers to win five races over a six-race span.

The UNOH 188 was Cindric’s second win in-a-row, as the only time he has not recorded a victory of this six-race stretch was on July 25 at Kansas when he secured a second-place finish.  He also continues to thrive in road course racing, on which he has accounted for four of his seven career wins.  In fact, his 12 career Xfinity Series starts on road courses have resulted in nine top-10 finishes, all in the top-5.

While Cindric won Saturday’s race by more than seven seconds over second-place finisher Brandon Jones, it was far from an easy win for the driver of the No. 22 Money Lion Ford Mustang.

“I’m not sure anyone was really happy with their race car,” Cindric said. “Unfortunately, I have a tough perspective of driving really fast, high-grip race cars at this track, but great credit to my team and everyone that puts this together. That’s five wins on the year and back-to-back now.  I’m really proud of that.  I didn’t feel like I drove my best today, but we executed there at the end where it counts and that’s what makes these races so difficult to win.”

Cindric battled Chase Briscoe for a majority of the afternoon before Briscoe was forced to exit the race after suffering severe damage to the front left side of his car in a multi-car incident shortly following a restart with seven laps remaining.  In fact, the pair combined to lead 42 of the first 44 laps of the race, including 26 by Briscoe.  Cindric led a total of 21 laps on the day.

Cindric won Stage 1 of the race by leading all 15 laps.  Briscoe then claimed Stage 2, as he led all but two of the 15 laps, and edged Cindric down the stretch as the two exchanged the top position on the final lap of the stage.

Cindric was obviously pleased to join Sam Ard in select company, but he is even more excited about producing valuable playoff points today in addition to his team’s prospects for the remainder of 2020.

“It’s incredible and takes great race cars and executing races,” Cindric said.  “I’m proud to be driving this 22 car and contending for wins week to week.  There’s still a lot of work to do, but this is great for the points for sure.”

Jones challenged Cindric briefly and led the two laps prior to the final restart of the day, but he did not have enough to keep pace with a hard-charging Cindric, who led the pack for the final five laps.

“I had a flashback to Kansas (1st-place finish for Jones) there when they all pushed up into turn one,” Jones said. “I hate there was a caution because I know (Austin) Cindric was lights out fast, but I think we could have at least gotten pretty close there the end to possibly winning this thing. It’s been a good day here. I did not come here thinking I was going to have a shot to win the race. I stayed in the game, never locked the wheels up, stayed on track and it paid off.”

Saturday’s race was originally scheduled to take place at Watkins Glen International but was realigned as a result of the pandemic and its impact on the state of New York.

The historic weekend of racing on the DAYTONA Road Course will conclude on Sunday, which will feature a doubleheader, consisting of the Sunoco 159 (12:00 p.m. ET, FS1) for the NASCAR Gander RV & Outdoors Truck Series, as well as the NASCAR Cup Series’ Go Bowling 235 (3:00 p.m. ET, NBC). Like the UNOH 188, Sunday’s races will be inaugural events on the DAYTONA Road Course for both series.

A limited number of fans will get the opportunity to see the Go Bowling 235 and Sunoco 159. Fans can get tickets, which start at $49 (both races included) for adults and $10 for kids 12 years old and younger, by visiting www.daytonainternationalspeedway.com or calling 1-800-PIT-SHOP.

Cindric will get a chance to make history yet again in just two weeks as the Xfinity Series will return to the high banks of the 2.5-mile Daytona International Speedway. The Wawa 250 is set for Friday, Aug. 28, while the Coke Zero Sugar 400 takes the green flag on Saturday, Aug. 29. It will be the final race of the regular season to set the 2020 Cup Series Playoffs.