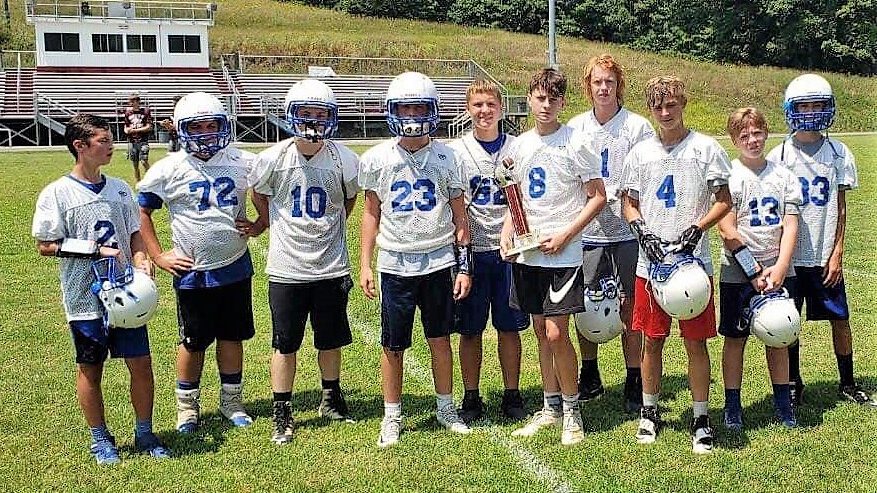 The word is out all over Eastern Kentucky, Breathitt County Football is BACK! Not just on the High School level, but at all levels. Anyone that has followed Bluegrass Sports Nation the last three years knows whom the NorthFork Lumberjacks are and their phenomenal run of excellence in Grade School Football. As the Lumberjacks move into their 6th year of competition, those early LJ’s have moved to the Middle School level and many will be Freshman at BHS this year, and the results are the same, impressive performances and wins.

For all of us old Bobcats who were around for the formative years of the program, the Glory years of three State Titles and 42 consecutive wins, and then unfortunately the dismantling of the program by State management of the school system, this is just awesome to witness.

As part of their preparation for the season, the Breathitt Middle School Bobcats traveled to Olive Hill on Saturday to compete in the West Carter 7 on 7 competition, fielding both an 8th Grade Team and 7th Grade Team and a group of linemen in the 1st Annual Ralph Asher Lineman Challenge. The young Bobcats did what they are accustomed to doing, performing well and bringing trophies back to Jackson.

Breathitt prevailed in the 7th Grade 7 on 7 Championship. This is significant in that though this was a 7th Grade competition, the Breathitt Middle team was actually made up of all 6th and 5th Grade NorthFork Lumberjacks. Great performance by these young men playing up and winning!! Team members were: Aaron David Johnson, Bryson Johnson, John Carter Hollon, Alex Strong, Kylan Combs, Brayden Barnett, Trace Kincaid, Wyatt Spencer, Adam Spencer, and Austin Bush.

Going to be a great season of Bobcat Middle and Lumberjack Football!!! Of course, we will bring you plenty of coverage here on BSN!!