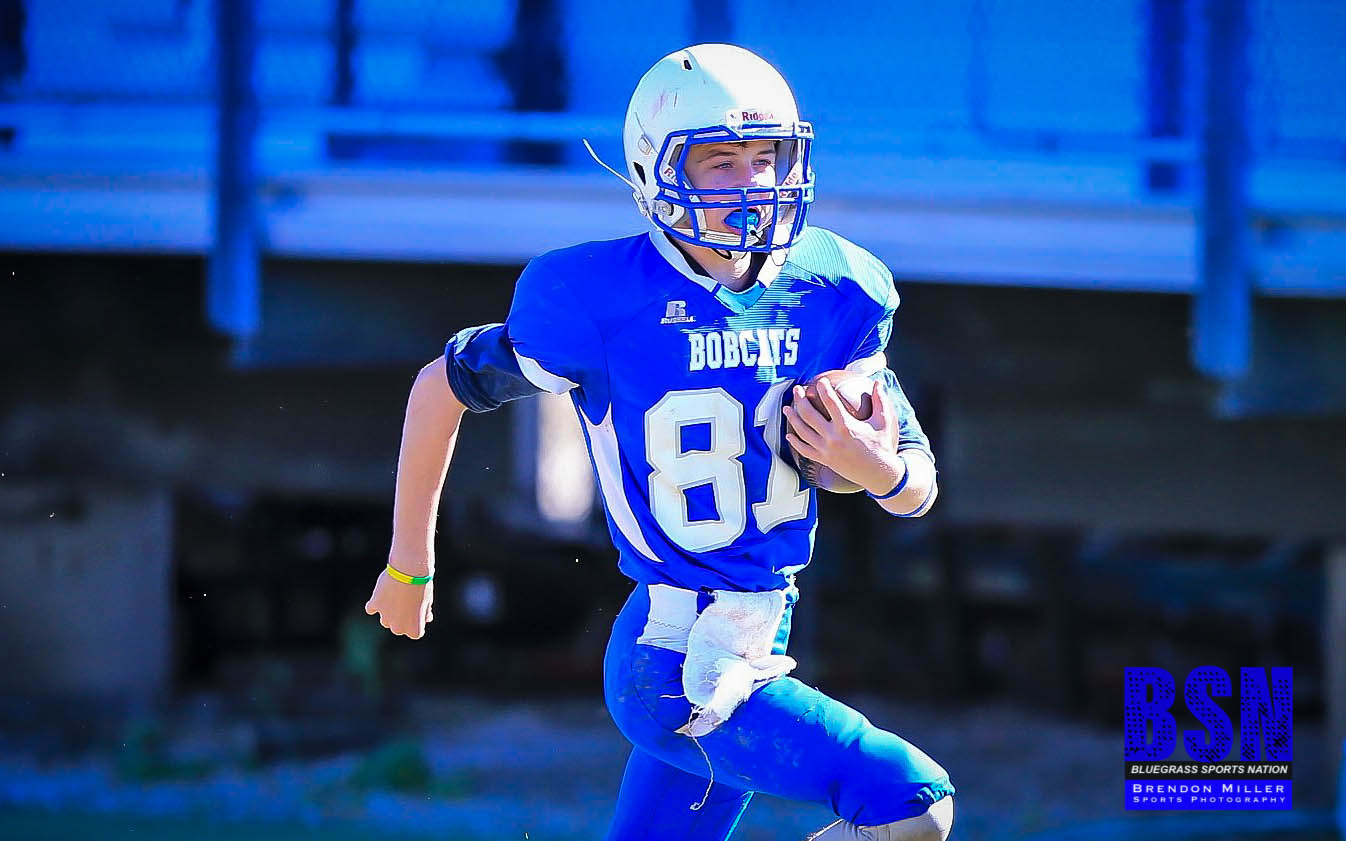 Brayden Johnson scores on a 61 yard pass in the 4th Quarter - photo by Brendon D. Miller/BSN

The Breathitt County Middle School Bobcats began their Second Season (playoffs) on Satruday afternoon as Pineville visited Mike Holcomb Athletic Complex to open the Kentucky Middle School Football Association Division 3 Playoffs. The Bobcats’ regular season was cut short after the team was exposed to COVID-19 by Johnson Central players in the Bobcats’ win on October 15th. Breathitt finished the shortened season at 5-0 after many cancelled games.

The Bobcats came out of the mandated 14 day quarantine on Thursday and were able to practice on Thursday and Friday. Tragically, strandout 7th grader John Carter Hollon suffered a broken leg in practice on Friday Night in preparation for the game. Hollon had battled back from a broken foot that had cost him the seaon and only played in the Johnson Central game on October 15th. Thoughts and prayers go out the John Carter on his recovery!

The KYMSFA seeded Breathitt as the number 2 seed in the Region 2 Bracket setting up the 2nd round matchup with 3rd seed Pineville. Pineville finished their regular season with an impressive 10-2 record.

Breathitt controlled the game from beginning to end on both sides of the ball. Offensively, all three of Breathitt’s backs, Kory Combs, Jason Tolson and Jayden Gibson crossed the goal line multiple times. Quarterback Aaron David Johnson was four of four on the day with a touchdown. Brayden Johnson caught three passes for 129 yards and a touchdown. The line continued stellar play by center Carson Miller; guards Sawyer Hall and Waylon Abner and tackles Ty Clemons and Chris Neace. On defense, the Bobcats threw their first shutout of the season behind all around excellent play forcing three turnovers.

GAME RECAP
FIRST HALF
PMS – (Pineville) Received the opening kickoff on their 38 yard line. BMS defense forced a three and out and PMS punted to BMS 47.
BMS – Bobcats lined up in a power I and ran the ball down the field on eight plays with Jason Tolson opening the scoring on a 14 yard run. Kory Combs’s pass was incomplete on the conversion. BMS 6 – 0.

PMS – Breathitt kick off was out of bounds and PMS took over on their 35. PMS fumbled the pitch on their first play with Jayden Gibson recovering the fumble and returning the ball to the PMS 17.

BMS – Bobcats ran three plays before the end of the 1st Quarter. On the first play of the quarter, Kory Combs ran it in from nine yards out. Combs then ran in the conversion to put Breathitt up 14-0
PMS – Received the Breathitt kickoff at their 26, and had their most successful drive of the day. Sawyer Thompson led the Mountain Lions to two first downs into Breathitt territory. PMS faced a 4th down and fumbled with Breathitt recovering on their 27.
BMS – Breathitt suffered a tackle for loss on first down and then an illegal motion penalty on 3rd down to set up a third and 22 from their own 15. Aaron David Johnson hit a streaking Brayden Johnson for a 47 yard catch and run to set BMS up at the Pineville 27. After a holding call on Breathitt in the red zone, the Bobcats overcame the setback and again steamrolled the ball into the endzone on a three yard Combs run. On the conversion, Combs got the ball across the goal line, but his knee was declared down prior and the conversion was not successful. Breathitt led 20-0.

PMS – Breathitt kicked off out of bounds and the drive began at the 35. Pineville ran five plays and turned the ball over on downs.
BMS – Johnson took a knee on the first play to end the half.

SECOND HALF
BMS – Squib kick was recovered on the 50. It only took the Bobcats a minute and six seconds on four plays to hit play dirt. After a loss on a screen on first down, Johnson and Johnson hooked up again on a screen in the flat that Brayden Johnson took for a 21 yard gain. On the next play, Combs took off through a huge hole for 37 yards down to the 4 yard line. Combs then dozed it in. Gibson ran in the conversion to make it 28-0 BMS.
PMS – Began drive at 35 after kickoff. Ran eight plays before turning the ball over on downs.
BMS – Breathitt again struck quickly as they scored on their second play as Combs weaved and out ran the Pineville defense from 61 yards. Gibson again ran in the conversion to make it 36-0 BMS. The rest of the game was played to a running clock.

PMS – Returned kickoff to Breathitt 48. Ran four plays before a fumble caused by Combs was recovered by Colby Bird on the Breathitt 39.
BMS – On the first play of the possession, Johnson hit a wide open Johnson for a 61 yard touchdown. Tolson added the conversion to set the final margin at 44-0.
PMS – Three plays till the game ended.

UP NEXT
Breathitt advances to the Region 2 Final to face Meece from Somerset on Saturday, November 7th. The game will be held at North Laurel High School in London.