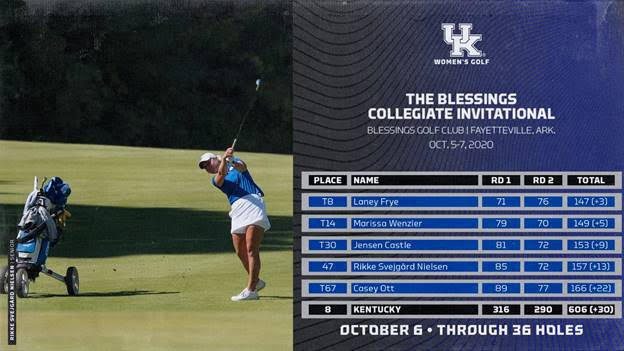 To understand the Kentucky women’s golf team’s disappointment with its start to the Blessings Collegiate Invitational on Monday, one only needs to look at the spectacular second round UK put together Tuesday.

Proving that the BCI start will likely be an aberration as the season wears on, Tuesday’s round, a masterful turnaround that saw the Wildcats shave off 26 strokes from their first-round score, is more fitting of the big expectations UK has for this talented and experienced group.

One day after turning in their highest score in more than two seasons (316), the Wildcats bounced back with one of the best rounds in the field. With sophomores Marissa Wenzler and Jensen Castle and senior Rikke Svejgård Nielsen returning to form and freshman Laney Frye remaining among the leaders, Kentucky carded a 2-over-par 290 at the Blessings Golf Club (par 72, 6,171 yards) in Fayetteville, Arkansas. That propelled the Wildcats up four spots and into eighth place heading into the final round.

Tuesday’s 18-hole score was bested only by Arkansas and South Carolina, who sit in first and third place, respectively. Arkansas, the tournament host, leads LSU by six shots at 1-under par.

UK’s 26-shot improvement from the first round to the second is the largest in-tournament turnaround since October 2015.

“Our team looked more like themselves and executed much better on the course today,” Kentucky head coach Golda Borst said. “They were disciplined, created more opportunities and stayed committed to their swings. They each played their own games today and didn’t let the course beat them up. We were able to take advantage of our opportunities today and we also had some players make some very big par saves, which kept our momentum going. I think there are a ton of positives to build on for tomorrow and we look forward to getting back on the course in the morning.”

Borst had little concern that her four returners in the lineup – the core that led the Wildcats last season to two championships and a runner-up finish, a record team scoring average, and the majority of Kentucky’s 10 top-10 and 20 top-20 individual showings before the breakthrough campaign was abruptly ended by the COVID-19 pandemic – would shake off the rough start. All of them did in a major way in the second round.

Wenzler was the best of the bunch, carding a 2-under-par 70 to move into a tie for 14th. Castle isn’t far behind after an even-par 72. With a three-birdie back nine, Svejgård Nielsen cut 13 shots off her Monday score for a 72 as well. And senior Casey Ott was 12 shots better than she was in the opening.

Meanwhile, Frye, after a 76 on Tuesday and a 36-hole score of 3-over par, is still in the top 10. Brook Matthews from Arkansas has taken a commanding five-shot lead at 11-under par.

All told, four of five Wildcats improved on their first-round score, three shot even par or better in the second round, and three players are in the top 30.

The Wildcat women are probably too far back to compete for a team title at this point, but the men are in full contention with a score of 1-over par, just four shots behind Alabama. Kentucky’s Alex Goff also leads the individual field at 10-under par.

The women will tee off Wednesday on hole No. 10 at 8:54 a.m. ET with the men slated for a 10:51 a.m. ET start. The Golf Channel will conclude its three-day coverage with four more hours Wednesday from 3:30-7:30 p.m. ET. Live scoring will continue to be available at GolfStat.com.

Wenzler put circles all over her scorecard Tuesday. After recording just one birdie in the opening eight holes, the sophomore posted a team-high-tying five of them in the second round. Looking more like the player that posted the third-best scoring average in school history last season and followed up with two championships and two runner-up finishes over the summer, Wenzler went out with a 34 and held it together on the difficult back nine with steady 36. She’s tied for 14th at 5-over par.

Frye remains the 36-hole leader for Kentucky at 3-over par overall. She wasn’t quite as sharp as Monday when she posted a 1-under-par 71 in her collegiate debut, but she still managed to roll in three birdies on the front nine. The freshman is tied for eighth place heading into the finale.

Castle was done in Monday but a pair of uncharacteristic triple bogeys. With those out of the way, the 2020 All-Southeastern Conference First Team selection bounced back with a team-high-tying five birdies for a second-day 72. Now tied for 30th at 9-over par, the program’s single-season stroke average record holder will try to record her sixth top-20 finish in seven college starts on Wednesday.

It won’t show up on her scorecard, but perhaps no one did more to save Kentucky’s big turnaround than Svejgård Nielsen. After struggling to make puts through the first day and a half, Svejgård Nielsen more than made up for it on the back nine. As the team started to stumble just a bit, the senior got the Wildcats back on track by making nearly 160 feet of putts on the back nine alone. With her even-par round Tuesday, she moved up to 47th at 13-over par overall.

The Blessings Golf Club is considered one of the toughest courses in the country. The Robert Trent Jones layout hosted the 2019 NCAA Championships.