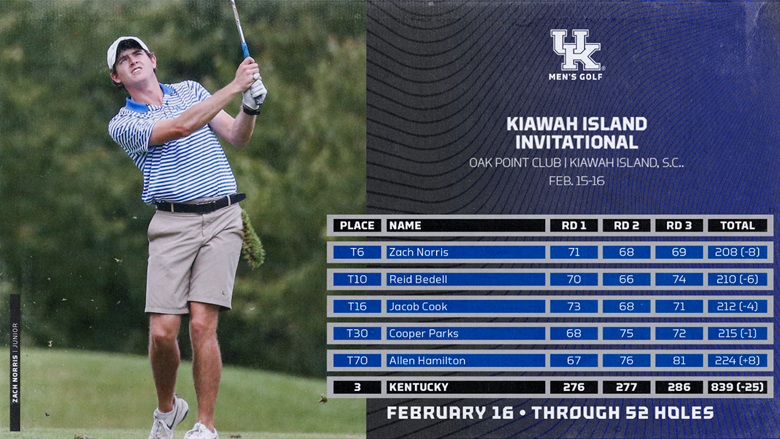 Powered by top-10 individual finishes from Zach Norris and Reid Bedell, the Kentucky men’s golf team opened its spring schedule with its first top-three finish of the year at the Kiawah Invitational. The Wildcats carded an 839 combined score which tied for the third-lowest mark in the Brian Craig era en route to a third place showing.

All five Kentucky starters earned a career low result with either a career-best tournament score or a career-low round. It’s the first top-three finish for the Wildcats since placing third at the Bearcat Invitational in 2019.

“This was a huge step forward for our team down in Kiawah Island,” Craig said. “Really proud of Zach Norris and Reid Bedell for leading the way and for Coach (Ben) Fuqua coaching them up. We will use this to keep building momentum as we head into the LSU event later this month.

“I keep saying this team is going to have a memorable spring, and this definitely is a step in that direction,” Craig said.

Wake Forest won the event at 37-under par. Clemson used a 7-under third round, the best on the course on Tuesday, to squeak past the Wildcats for second place. Kentucky shot 25-under for the week and finished in third.

Norris produced the best result of his career with his first top-10 individual finish, the lowest tournament score (208) and the lowest round (68) of his career. He finished in a tie for sixth following rounds of 71-68-69. He was the only Wildcat to play under par during all three rounds.

The McKee, Kentucky, native concluded his second round with a 68 which included birdies on two of his final three holes. He opened play in the third round with a birdie on the par-five first. With three more birdies at the third, eighth and ninth he made the turn at 4-under par. Norris then birdied the par-four 10th to get to 5-under. He gave a shot back and answered with another birdie at the 12th. Back-to-back bogeys at the 13th and 14th resulted in the 3-under 69 score.

Bedell tied for 10th bolstered by a career-low-tying second round of 66. He capped the week with a 6-under 210 score which is his third-lowest career tournament score in his first start as a Wildcat.

The Fair Haven, New Jersey, native’s second round was simply masterful. He did not commit a bogey and captured six birdies for his career-tying low score. He had three each on the front and back nine. Bedell fought off a slow start to his third round as he found himself in a five-shot hole through 11. He rebounded with birdies at the 12th, 13th and 17th for a 2-over round and a 6-under tournament score.

It is the 12th top-10 finish of his career. Bedell was ranked among the top-100 players a season ago after leading the Big South Conference in scoring average last season.

For the second-consecutive tournament, graduate student Jacob Cook scored a 212 which is a career low. He placed in a tie for 16th to earn the first top-20 finish of his career. His second-round 68 was a career-low mark.

The Frankfort, Kentucky, native picked up birdies on three holes to open his front nine during his record-setting second round. He combated a bogey at the 15th with another birdie at the par-five 17th to finish the round. He played at 1-under par during both the front and back nine for a 2-under 70 during the final 18 holes.

Sophomore Cooper Parks tied for 30th and his score of 215 ranked as a career best. His opening round of 68 resulted in a career-low round for the Campbellsville, Kentucky, native. Parks shot an even-par 72 during the final round. Birdies at the opening hole as well as the par-five eighth and 12th highlighted his round.

Senior Allen Hamilton opened the week with a career-low round of 67. He finished the tournament in a tie for 70th following rounds of 76 and 81.

Sophomore Jay Kirchdorfer led the way for the three individuals competing this week. Kirchdorfer tied for 54th with rounds of 75-75-71. The final round 71 is the lowest of his collegiate career. Classmate Jackson LaLonde tied for 58th. He carded scores of 70-70-82. He’s played under par in three of six rounds this season. Freshman Hugo Archer, making his collegiate debut, finished in 83rd after back-to-back rounds of 74 to finish the tournament.

The Wildcats return to action Feb. 26-28 at the LSU Invitational in Baton Rouge, Louisiana.