Kerns Hold On for Hard-Fought Win Over Southern Utah 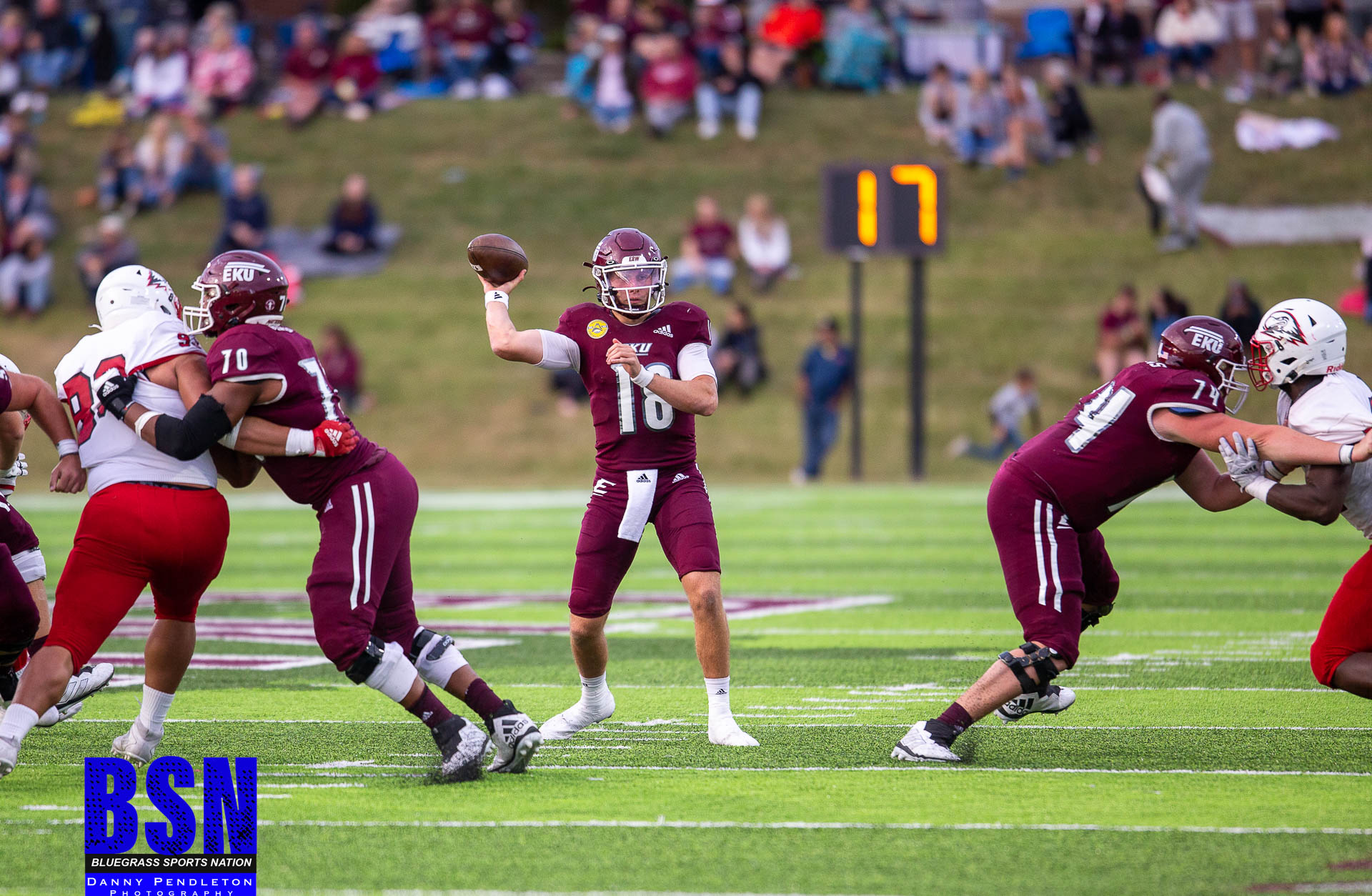 The No. 25-ranked EKU football team used three rushing touchdowns and a pair of program records from Parker McKinney to outlast Southern Utah in front of 14,099 fans at CG Bank Field at Roy Kidd Stadium on Saturday night, beating the Thunderbirds 35-28.

EKU’s defense opened the night with a three-and-out and, on the ensuing possession, Eastern marched down the field for a touchdown as McKinney scored on a two-yard run to put the Colonels up 7-0 with 9:39 left in the first quarter.

Southern Utah tied the game at the 12:45 mark of the second quarter, but EKU answered less than three minutes later as McKinney bulled his way in from two yards out. McKinney also set his first of two records on the night during the drive, passing TJ Pryor for program’s career total offense record. McKinney has accumulated 8,625 yards in his Colonel career.

After the Thunderbirds answered with 6:07 left before halftime, EKU again found the end zone, driving 70 yards in seven plays. McKinney did the honors again, notching his third two-yard touchdown run of the half. The game marked McKinney’s first contest with multiple rushing touchdowns and EKU’s first game with a player to score at least three rushing touchdowns since the 2021 season opener at Western Carolina.

EKU’s defense held and kept the Colonels up 21-14 heading to halftime, but Southern Utah would tie the game again late in the third quarter. Once again, EKU answered on the ensuing drive when McKinney found a wide-open Braedon Sloan down the sideline for a 34-yard touchdown to put the Colonels ahead 28-21 with 1:39 remaining in the quarter.

Southern Utah knotted the score for the fourth time on the first play of the fourth quarter and had an opportunity to take its first lead after the Colonels went three-and-out on offense. However, EKU’s defense turn SUU away and a 41-yard field goal attempt sailed wide left to keep the game tied.

Eastern Kentucky’s offense responded with its longest drive of the night as the Colonels marched 75 yards in nine plays. McKinney put the Colonels in Thunderbird territory with a 26-yard completion to Jayden Higgins that gave the EKU signal-caller the program’s career passing yardage record. Two plays later, Sloan burst up the middle for a 27-yard go-ahead touchdown with 6:13 to play.

Southern Utah put together one final drive, but a fourth down stop from Joseph Sayles gave the ball back to EKU with 3:22 remaining. The Colonels ground out a pair of first downs and ran out the clock to notch their eighth consecutive win at home.

McKinney finished the night going 21-of-26 for 331 yards and one touchdown through the air, while rushing for 65 yards and three touchdowns. His completion percentage of 80.8 percent marked his highest in a game with at least 10 pass attempts in his career. Sloan rushed 20 yards for 88 yards and a score, while also catching five passes for 68 yards and a touchdown. Dakota Allen caught four passes for a team-high 87 yards. Smith hauled in six passes for 77 yards in the win.

Eli Hairston led the Colonel defense with nine tackles on the night, while Sayles and Chase Lasater each tallied eight stops. Sayles led the unit with 2.0 tackles for loss.

EKU is off next weekend and returns to CG Bank Field at Roy Kidd Stadium for a contest against the Sam Houston State on October 15 at 6:00 p.m.