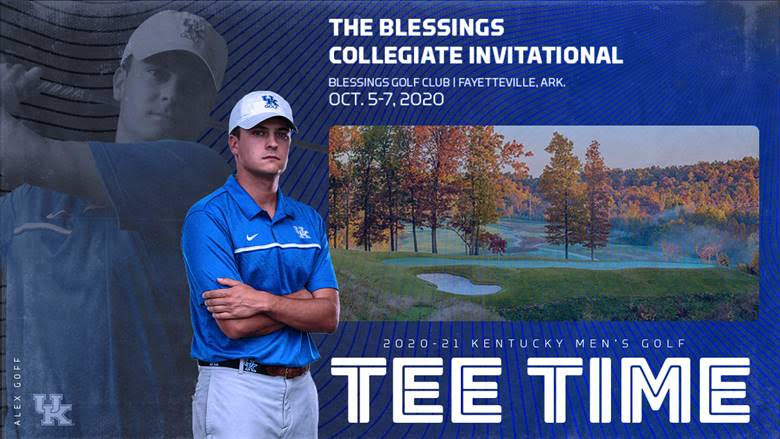 The Kentucky men’s golf team will open its 2020-21 campaign at The Blessings Collegiate Invitational hosted by Arkansas Oct. 5-7. The three-day, 54-hole event will feature all 14 teams from the Southeastern Conference in a simultaneous event alongside the league’s women’s teams. GOLF Channel will provide live coverage during all three rounds, airing from 3:30-7:30 p.m. ET each night of the tournament.

“What an event we have to start our fall season,” UK head coach Brian Craig said. “The Blessings is a phenomenal test of golf and having the GOLF Channel televise the event is really special for our student-athletes. On top of that, having all of 14 SEC Teams in the field will make it an elite Division I college tournament; and we get to compete on the same course and at the same time as our women’s team. This will be a memorable week and we are ready to compete.”

Goff concluded his summer by winning the 106th Kentucky Amateur event by a four-stroke margin. He also earned a runner-up finish at the 91st Southeast Amateur earlier in the summer. The Kings Mountain, North Carolina, native started all six events for the Wildcats during the abbreviated 2019-20 season. He earned a 73.00 stroke average which ranked second on the team. He had a team-high four top-20 finishes and a pair of top-10 finishes. With a career-low round of 66 to conclude play at the Tiger Invitational, Goff earned his career-best finish of a tie for eighth in the team’s final event last season.

Cook enjoyed arguably the best summer of any UK player. He earned wins at the Lexington City Championship and the Daniel Boone Invitational, while earning low amateur status at the Unbridled Event at Boone’s Trace and at the 101st Kentucky Open. The Frankfort, Kentucky, native saw action in five tournaments last season. He boasted a career-low scoring average of 73.46 and earned career lows in round score (69), tournament score (216) and individual finish (tied for 21st).

Hamilton is coming off the most prolific season of his career. The Louisville, Kentucky, native led the Wildcats with a 72.88 stroke average. He earned two top-20 finishes and captured the best finish of any UK player in 2019-20 when he tied for fourth at the Bearcat Invitational. Hamilton also garnered a team-best eight par-or-better rounds. The highlight of his season may have been a tie for second at the Genesis Open Collegiate Showcase where he played alongside PGA Tour member and UK Athletics Hall of Famer J.B. Holmes. He just missed out qualifying for the PGA event by one stroke.

Kremer, the lone first-year player to earn a spot in this week’s starting lineup, is a heralded junior player. The Louisville, Kentucky, native was rated as a top-20 player in the class of 2020 according to the Junior Golf Scoreboard. He is a two-time all-state selection and was a member of the 2016 Saint Xavier team that claimed the state championship. During his junior campaign, he generated a team-low scoring average with a 70.3 and had nine straight under par rounds. As a senior, he earned a 71.3 average. He qualified for the 2018 US Junior tournament and won the 73rd Junior Falls Cities Match Play Championship.

Parks is coming off a successful freshman campaign where he made five starts and earned a 74.54 stroke average over 13 rounds. He began his collegiate career with a top-20 finish in the form of a tie for 18th at the Island Resort Intercollegiate last season. The Campbellsville, Kentucky, native fired a career-low round of 70 at the Bearcat Invitational and boasted a career-low score of 218 at that event. He began the spring season with an even-par round at the Dorado Beach Collegiate before the tournament’s final two rounds were canceled due to heavy rain.

The tournament will feature all 14 teams from the SEC. To help with safety measures, each team will be paired with its starting five. The men and women comprising the SEC will play in a simultaneous event, making the tournament one of the most unique in all of golf.

GOLF Channel will deliver live coverage each night from 3:30-7:30 p.m. ET. It will mark the first televised event for the 2020-21 collegiate golf season. Teams with morning tee times on Monday will play in the afternoon on Tuesday. The leaders will tee off in the afternoon to culminate in a winner being crowned on live television on Wednesday.

The Blessings Collegiate Invitational will be contested without spectators. Event officials are working closely with the golf club and other health-related resources to carefully monitor the ongoing COVID-19 pandemic. Organizers will implement increased health and sanitation procedures in effort to protect the health and safety of the players, coaches, officials, staff and production personnel on site.

Live stats will be provided by golfstat.com.

Blessings was designed by Robert Trent Jones Jr., and opened in 2004 and was home to the 2019 NCAA Men’s Golf Championship. From the back tees, its rating is 79.1 and its slope is 153, making it one of the toughest courses in the country. It features three par-five holes on the out and three par-three holes on the in for a par of 37-35-72. It has a topography featuring hilly terrain which creates numerous sidehill lies, dramatic elevation changes and Clear Creek is in play on several holes.