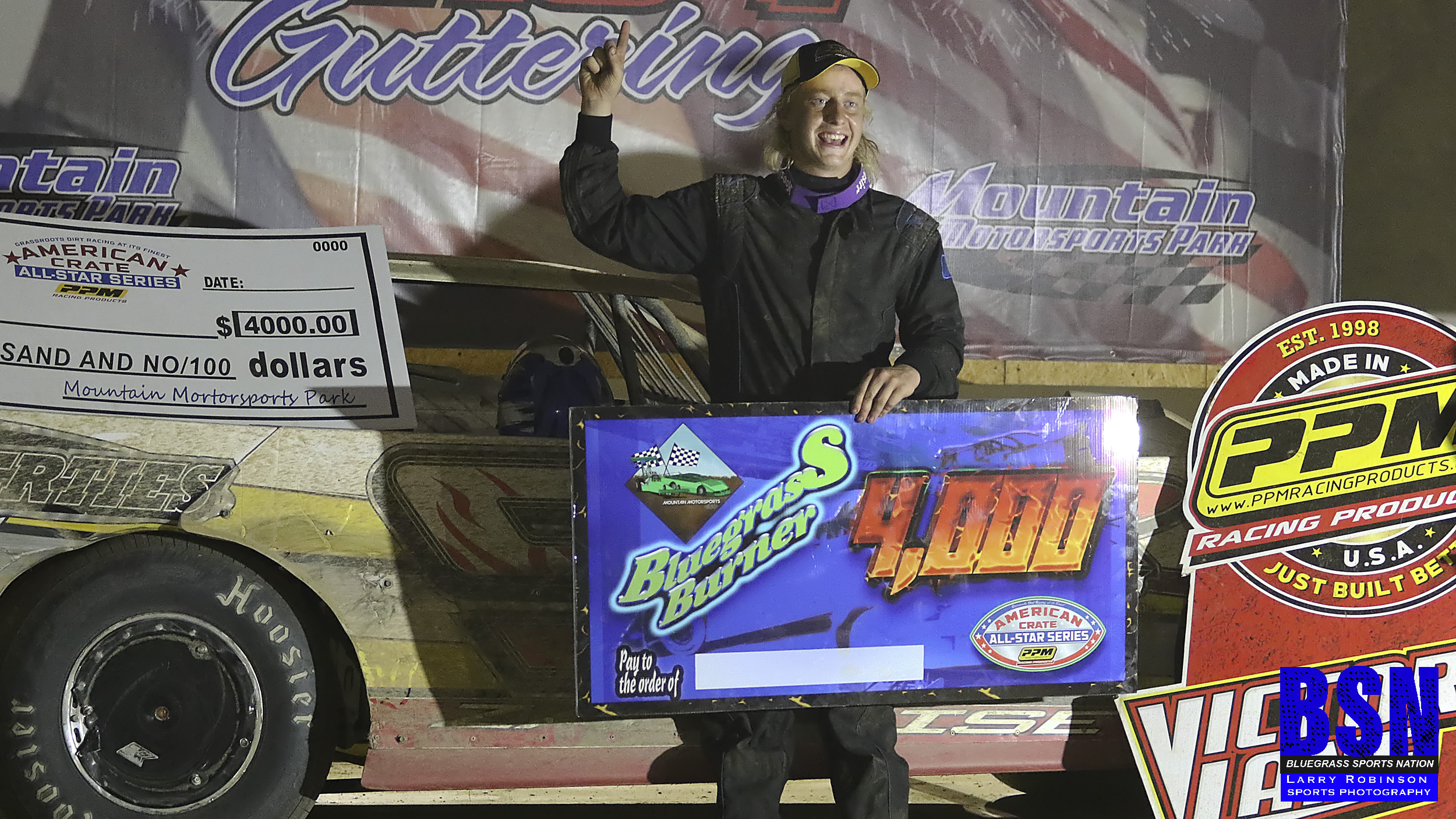 Twenty-five All-Stars signed in to Mountain Motorsports Park for the series first trip to the Bluegrass State. A mix of touring, regional, and local racers made up the field with a very strong group of racers on hand.

Hot laps saw Zach Sise blister the track turning a time of 16.4720. Matt Long, who made the trip up from Concord, NC was the second fastest in hot laps with a 16.5091. Josh “Boo” Henry was extremly fast on a track that really fit his driving style turning the third fastest hot lap with a 16.6283. Michael Bland, was fourth fastest setting a time of 16.7814 and Tyler Collins looked to be a sure lock into the dash, if he could back up his hot lap time, as he went fifth fastest at a 16.7827.

Qualifying saw the local track hero, Raymond Nichols, pick up the Eagle Racing Engines fast time award turning a 16.2198. Michael Bland would go second quick at a 16.4588 and Zach Sise was third at a 16.4724. Boo Henry continued to be fast, as he was fourth fastest in qualifying, setting a time of 16.5180. Matt Long was fifth fastest at a 16.7036 and Colton Profitt went sixth fastest to make his first ever fast six dash turing a time of 16.7283.

Click Link for Full Image Gallery of the Night!: https://bluegrasssportsnation.com/bluegrass-burner-image-gallery-7-18-20/

Eli Beets would win heat one over Chris Chandler and Zane Powell. Pensylvania’s David Airgood would take the victory in heat two over Trevor Sise and Stephen Martin. Heat three went to Derek Fisher over Tyler Collins and Tyler Arrington.

The 45 Lap Bluegrass Burner field was set and Raymond Nichols jumped out to the early lead and the fans went crazy cheering for their local hero. Zach Sise worked his way from his fourth starting spot and began a battle with Nichols for the lead. Side-by-side they went battling for the lead, lap after lap.

Lap twenty-five the hearts of many local fans broke as the #10 of Nichols slowed hendered by a flat tire. Nichols would continue, but it would bury him at the back of the field and he wouldn’t have time to return to the front. Sise then set his sights on finishing the last twenty laps and winning the race.

Michael Bland made several attemps at passing him, but it never happend for him. Sise would go on to pick up his first ACAS Victory over Miachel Bland for second. Matt Long who made several attemps to pass Bland let had to settle for a third place finish. Eli Beets who worked his way forward all night long brought home a solid fourth place finish over Trevor Sise in fifth.

Tyler Arrington, the points leader, would take sixth, but both Beets and Trevor Sise made up some ground. Raymond Nichols worked his way back up from the flat tire for a seventh place finish. Colton Profitt ran a very respectable 8th place over the Hard Charger of the Race Terry Poore. Zane Powell in his first start with the series would round out the top ten.

The American Crate All-Star Series would like to thank all the fans, drivers, and race teams for their support at Mountain Motorsports Park!