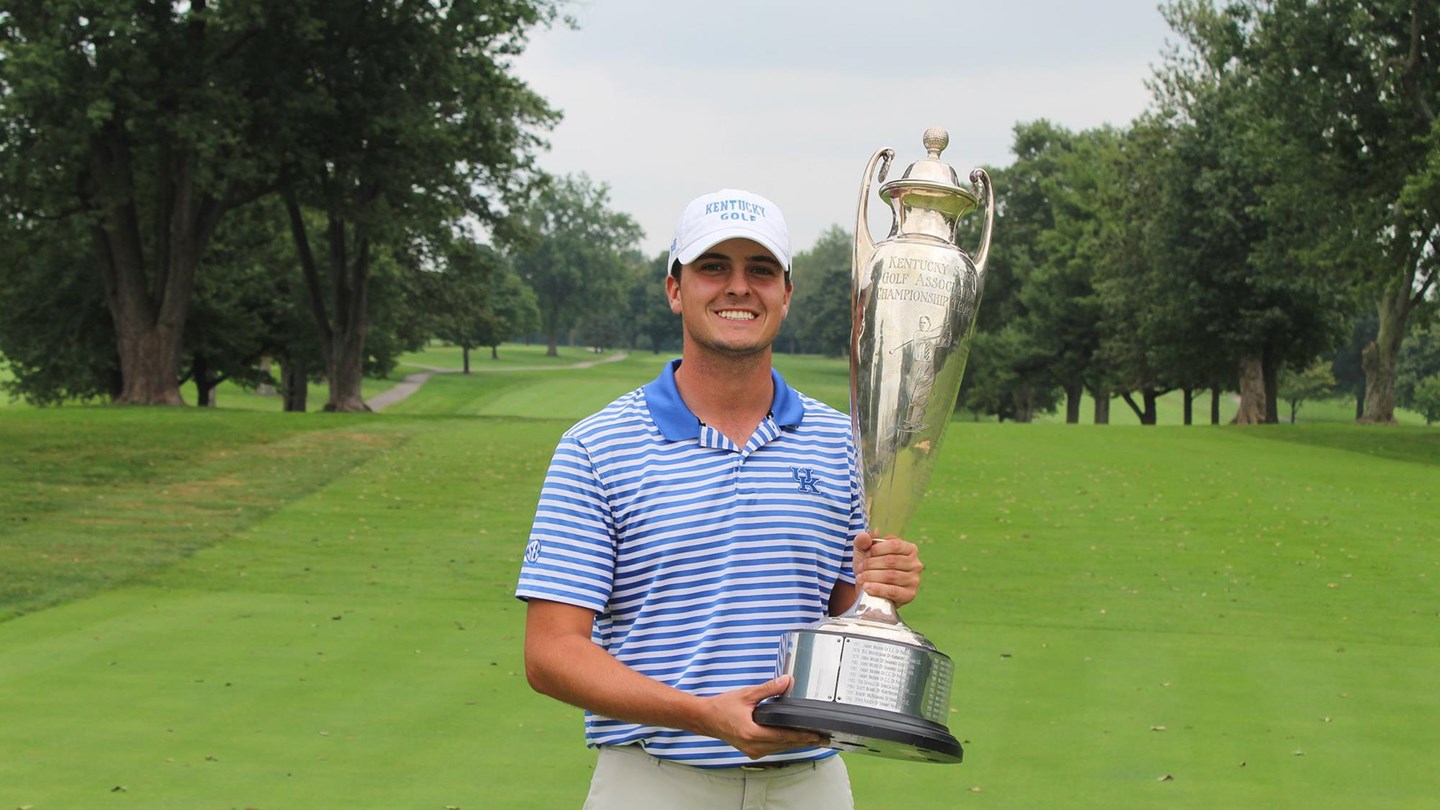 Seven Wildcats finished in the top 20 on the leaderboard

With eleven current Kentucky men’s golf players in the field at the 106th Kentucky Amateur it was only fitting one would end up on the top of the leaderboard. Alex Goff secured the victory behind a four-stroke margin to lead six total players with under par scores for the three-day, 54-hole event played at the Lexington Country Club.

“It feels so good to see all of the hard work pay off,” Goff said. “I’ve been knocked at the door for awhile and to finally win one feels amazing. This definitely gives me a lot of confidence heading into my fall season.”

Goff was sensational with rounds of 67-67-70 (204) to finish at 12-under par. He entered the final round with a three-stroke advantage and promptly birdied the opening two holes to increase his edge to five shots. The lead swelled to as many as seven during the back nine, a pair of late bogeys were followed by pars on the final two holes to secure a comfortable and dominating win. His teammates looked from the fringe on as he tapped in for par and applauded his efforts.

“To get this win in front of my teammates and best friends means so much to me,” Goff said. “We have been through a lot the past couple of months with the passing of our teammate Cullan Brown. I know he was with me the whole way this week. This will is for Cullan.”

The Kings Mountain, North Carolina, native led seven total Wildcats in the top 20 – and that does not include assistant coach Ben Fuqua who carded a 2-over score to finish tied for 11th.

Hugo Archer was the low junior paced by a stellar 4-under during the final round to surge into a tie for seventh. His eagle on the par-five 18th capped the outstanding round.

Jacob Cook, who has played extremely well this summer, finished in a tie for fifth at 1-under par. He birdied the 18th hole to conclude the tournament in style.

Garrett Wood, Cooper Parks and Campbell Kremer all tied for 14th behind combined scores of 3-over par. Wood and Kremer played even par during Friday’s final round, while Parks logged a 3-under scorecard to move into the top 15. Zach Norris placed 19th overall with a 4-over score. He put together an even-par round during the first and third rounds.

“I could not be prouder of Alex Goff,” UK head coach Brian Craig said. “He has put himself in the hunt lately in a few quality tournaments. He learned from those experiences and broke down that wall in a big way with a four-shot win in our Kentucky state amateur. That is huge and I love seeing it. He consistently puts in the work and it is great to see him get a really nice win.

“Also, Jacob Cook and Hugo Archer had very solid performances,” Craig said. “Jacob has matured into a terrific player and Hugo, a freshman from France, played very well for his first event in the United States. His final round of 68 today is exactly what this team needs.”

The amateur event marked the final tune-up for the Wildcats before beginning their 2020-21 season at The Blessings Collegiate Invitational Oct. 5-7 in an event which will have coverage provided by the Golf Channel.