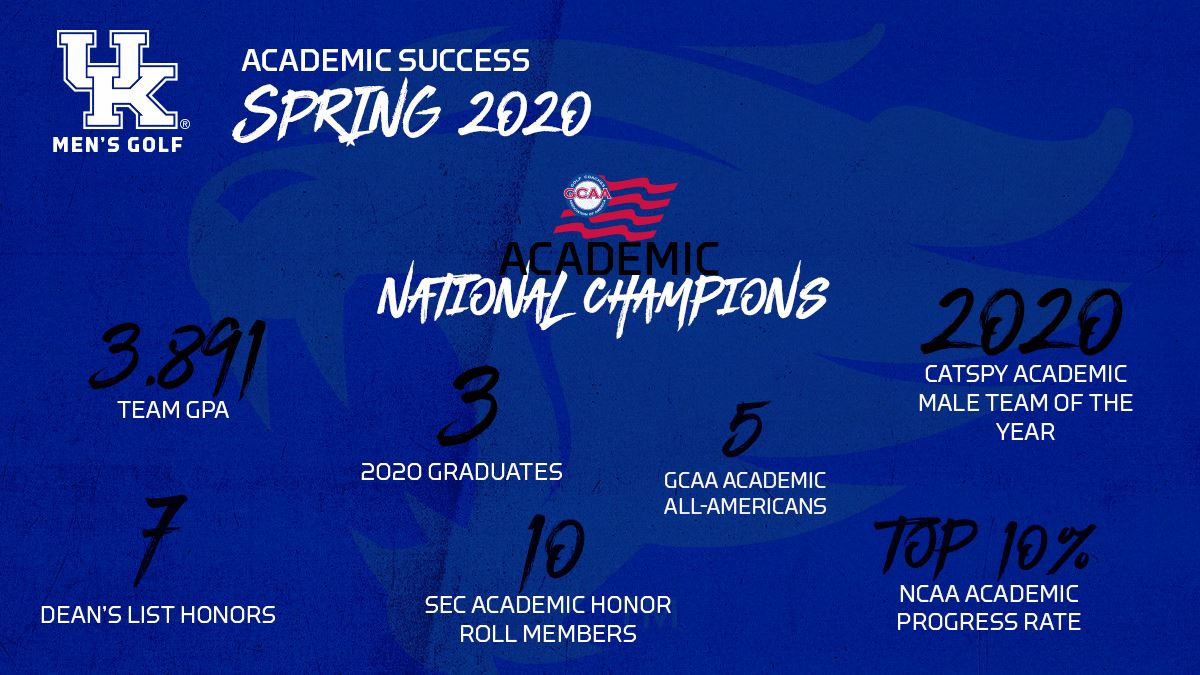 National champions! The Kentucky men’s golf team was named the Division I Academic National Champion by the Golf Coaches Association of America after owning the highest team grade-point average in the nation in 2019-20.

The national champion honor is the first in program history.

“I am so honored to coach these young men,” head coach Brian Craig said. “What extraordinary student-athletes they are who represent the Big Blue Nation in a first-class manner. Not only are they very bright students, but more importantly, they have their priorities in place and work extremely hard in the classroom.

“A big thank you also to Amy Craiglow and the wonderful people in our CATS center,” Craig said. “They are the best in the business at creating a culture of academic success for all of our student-athletes.”

A total of 250 schools submitted GPA’s of 3.0 or above, with 95 of those schools earning Presidents Special Recognition Honors, finishing with a team GPA of 3.5 or higher.

The GCAA team award is a culmination of all of the academic honors the Wildcats have hauled in following the conclusion of the spring semester. After the team’s season was cut short on the course due to the COVID-19 pandemic, the players finished the semester strong earning the 3.891 grade-point average. It was the highest GPA recorded by any UK team during the spring semester.

In April, the Wildcats were tabbed the CATSPY winner for male Academic Team of the Year. It marked the fifth straight year and the seventh time overall Craig’s squad earned the award.

Cook, Liston and student coach Max Mehles all earned their undergraduate degrees in May. Cook earned his degree in management and was inducted into the Frank G. Ham Society of Character in addition to representing the Wildcats at the Southeastern Conference’s Student Athletic Advisory Committee meeting in January. Liston graduated with a degree in finance. He completed his four-year career as a four-time Academic All-SEC selection and he appeared in 27 career events, including the 2019 NCAA Regional. After a stellar two-year playing career where he earned a 72.98 stroke average, Mehles spent his last year in college serving as a student assistant coach. He earned his degree in management.

Five Wildcats were named Early Wave Srixon/Cleveland Golf All-America Scholars for their outstanding effort both on and off the course. Cook, Hamilton, Liston, Norris and Wood were UK’s five recipients who were among a record 376 players in Division I golf to claim the honor. To be eligible a player must be a junior or senior academically, compete in at least three full years at the collegiate level, participate in at least 40% of the team’s competition, have a stroke average under 76.0 and maintain a minimum cumulative grade-point average of 3.2. A recipient must also be of high moral character and be in good standing at his college or university.

Lastly, Craig’s program once again received Public Recognition Awards for its Academic Progress Rate score. UK received the honor for placing in the top 10% of the Division I schools. The APR provides a real-time look at a team’s academic success by the progress of each student-athlete on scholarship. The APR measures academic eligibility, retention and graduation. The scores are a four-year composite, covering the 2015-16 through the 2018-19 school years. It marked the ninth year in a row, Craig has directed his team to a top-10 finish.

The Wildcats are also enjoying success on the golf course this summer. Cook finished as the low amateur at the Unbridled Event at Boone’s Trace National Golf Club in Richmond, Kentucky, in May. He then won the Lexington City Championship on July 12 and won the 2020 Daniel Boone Invitational on Sunday. Kirchdorfer captured the Kentucky Match Play Championship last week. He rallied from a 3UP deficit to defeat the tournament’s top overall seed 1UP. Wood tied for third at the Ohio State Amateur and Goff finished second at the Southeastern Amateur to highlight the Wildcats’ summer.