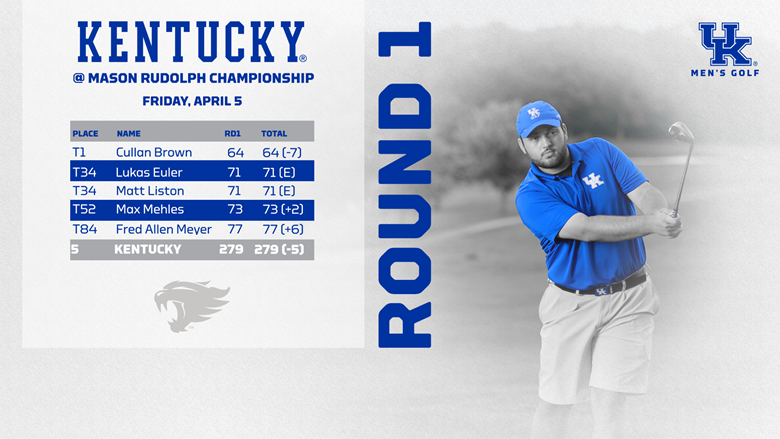 Kentucky sits in a tie for fifth at 5-under par

FRANKLIN, Tenn. – Freshman Cullan Brown birdied five times and eagled once on Friday to enter the clubhouse with a tie for the lead after day one of the Mason Rudolph Championship. Brown fired a round at 7-under par to lead the field by three strokes.

Kentucky sits in a tie for fifth following the opening 18 holes at 5-under par. The team’s opening round score of 279 is the best team round of the season with the previous best coming at Hootie at Bulls Bay when Kentucky shot a 281 during round three on March 26. The Cats will tee off on Saturday at 8 a.m. ET.

Brown’s opening round 64 tied for the lowest individual round in the Brian Craig era at Kentucky, equaling Jordan Blann’s record of 64 in 2009. Brown had previously shot his career-best of 70 twice this season.

“Cullan Brown had a little coming out party today. A 64 as a freshmen coming off an injury that kept him off the course for a while, is not bad at all,” Craig said. “I am also proud of Matt Liston who played very solid golf today with a 71. As a team, we are in a good position after day one. We need to keep the focus on what we can control and stay positive. There is a lot of golf left.”

Senior Lukas Euler and junior Matt Liston sit in a tie for 34th at even par. Euler birdied three times, including on 16 and 17 to find even while Liston bookended his round with two birdies at holes No. 1 and 18.

Senior Max Mehles started his round with bogeys on two of his first three holes to finish the front nine at 3-over. Mehles was able to find some momentum heading into Saturday, as he went 1-under par on the back nine to put himself in a tie for 52nd at 2-over.

Seniors Fred Allen Meyer and Fadhli Soetarso shot 6-over and 7-over par on Friday and are tied for 84th and 86th, respectively. Soetarso is playing this weekend as an individual.

The course is set up as a par 71 over 7,100 yards. The field is comprised of 15 other teams, including three from the SEC in Tennessee, Mississippi State and Vanderbilt. Tennessee leads the team standings at 15-under par.

Live stats are available via Golfstat.com.