Frye Debuts at 1-Under Par at Blessings Collegiate Invitational 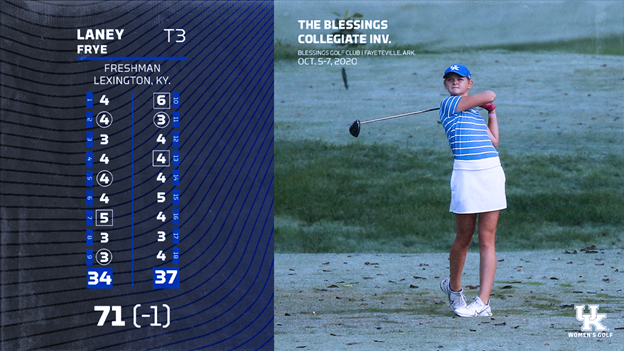 Monday was not the debut the Kentucky women’s golf team had hoped for in its long-awaited debut save for one tough freshman: Laney Frye.

Playing in her first collegiate event, Frye shot a 1-under-par 71 in her first round at the Blessings Collegiate Invitational. With four birdies on the difficult layout at Blessings Golf Club (par 72, 6,171 yards) in Fayetteville, Arkansas, the Lexington native led UK in what was an otherwise unfavorable start to the 2020-21 campaign.

Starting on the back nine, the Wildcats yielded some early high numbers they were never able to recover from. After the first of three rounds in the first tournament of the fall season, Kentucky is in 12th place with a score of 28-over par (316). No thanks to one of the toughest courses in the country, UK posted its highest team score in more than two seasons.

“Today was rough,” Kentucky head coach Golda Borst said. “The golf course truly got the better of us, both physically and mentally. We’ve got a lot of golf ahead of us and we just need to dig in, control what we can and compete.”

The good news: There is still plenty of golf to be played with two rounds to go, and with danger lurking at every turn at the Blessings, no lead is safe.

Arkansas, playing on its home course, navigated the Robert Trent Jones layout and 2019 NCAA Championships course the best. The Razorbacks lead the women’s side of the Southeastern Conference-only field at 1-over par. LSU (5-over par) and Florida (7-over par) are close behind.

The 54-hole mixed men’s and women’s tournament resumes Tuesday at 9:30 a.m. ET with the Wildcat women slated to go off together at 11:55 a.m. ET. The Golf Channel will continue its coverage with four more hours Tuesday from 3:30-7:30 p.m. ET. Live scoring will be available throughout the tournament at GolfStat.com.

Kentucky will need a big bounce-back in round two if the Wildcats hope to get back into the mix. Fortunately, they’ve got both the firepower and the experience to do so.

UK entered this season with high hopes after returning every major piece from its breakthrough 2019-20 season. The Wildcats won two championships to go along with a runner-up finish, set a record for team scoring average, and posted 10 individual top-10 finishes with 20 top-20 showings before the season was abruptly ended by the COVID-19 pandemic.

Frye wasn’t a part of that magical ride but should strengthen what’s expected to be another solid team this season, notwithstanding Monday’s results. The Lexington Christian Academy product waded through some early jitters for one of the top rounds of the day in the 70-player field.

After a bogey at the par-5 10th, UK’s opening hole of the day, Frye responded with a birdie at No. 11. She bogeyed No. 13 but then really got into a groove. She would go 2-under par over the next 10 holes and countered a late bogey with a birdie on her final hole.

That all added up to a 71 for her first college score and puts her in a three-way tie for third place, four shots back of the co-leaders, Brooks Matthews from Arkansas and Ingrid Lindblad of LSU.

“We are so proud of Laney,” Borst said. “She really held her own today and played a great round of golf on a tough course. She played with poise and executed her game plan very well. I know she was nervous all day, but she kept plugging along, stuck to her routine and she played her game. We couldn’t be happier for her.”

Unfortunately, the rest of the Wildcats didn’t fare as well Monday.

Sophomore Marissa Wenzler, who posted the third-best average in single-season school history a season ago, carded a 7-over 79. She’s in a tie for 44th, but if she can rekindle her play from this summer that saw her win two tournaments with two runners-up, don’t expect her to be there long.

Fellow sophomore Jensen Castle also had an uncharacteristic off day. The 2020 All-SEC First Team selection and UK’s single-season stroke average record holder was doomed by a pair of triple bogeys on her scorecard. Despite four birdies, she turned in an 81 and is in a tie for 53rd place.

Senior Rikke Svejgård Nielsen, Kentucky’s top qualifier for the BCI, could not find a red number in the first round. She opened with an 85 and is tied for 64th.

Junior Casey Ott posted an 89 and is in 70th place.

All four of the returners turned in the highest scores of their collegiate careers, an indicator of the difficult test the Blessings Golf Club presents but a sign that the Wildcats can do much better.

The Wildcat men got off to a good start in the three-day tournament. They are in a tie for second place at even par.