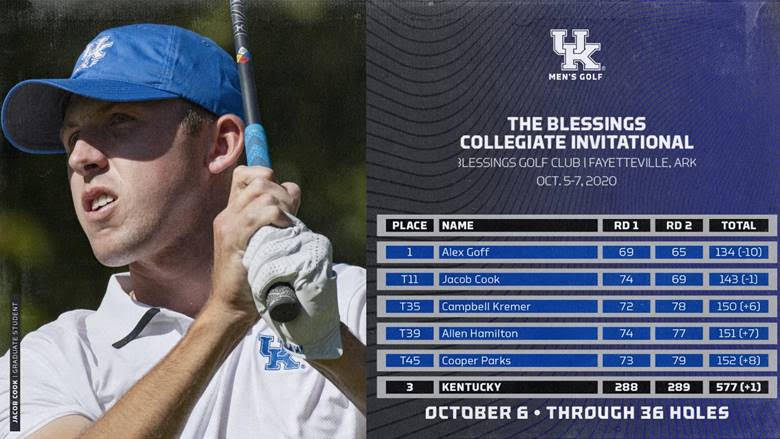 Powered by a spectacular and record-breaking round from sophomore Alex Goff who fired a 7-under par 65, the Kentucky men’s golf team enters Wednesday’s final round of The Blessings Collegiate Invitational in contention for an individual and team championship. Goff leads the field by four shots following his career-best showing as the Wildcats are four shots back of Alabama for the team lead with 18 holes to play.

Goff’s round of 65 marks a record for Blessings Golf Club during tournament competition. The previous record was a 66 by Oklahoma State’s Matthew Wolfe during the 2019 NCAA Championship.

He was not the lone Wildcat to shoot under par as Jacob Cook also turned in a sub-par scorecard with a round of 69 for a 3-under score. He is 1-under for the tournament and just outside of the top 10 as he sits in a tie for 11th.

The Crimson Tide used the lowest round of any team in the field on Tuesday to move into first place at 4-under par. Tennessee is second at 1-under par, followed by UK at 1-over heading into the final round.

“It was a pleasure watching Alex play today. He was so absorbed in the moment and played very smart golf all the way around this great course,” UK head coach Brian Craig said. “Cookie bounced back and played like the champ he is today. It is a good start, but there is still a long way to go. The truth is we don’t have anything but a good start. Staying in the present and continuing to play smart and aggressive golf is our only focus.”

UK begins its final round at 11:36 a.m. ET off at the No. 1 tee on Wednesday. GOLF Channel will continue to deliver live coverage from 3:30-7:30 p.m. ET. Live stats will be provided by golfstat.com.

Goff was simply sensational as he takes a four-shot lead into the final day of play. He began his round with a birdie at the par-five 10th hole as the Wildcats started on the course’s back nine. He picked up another stroke at the par-four 12th before yielding the stroke back on the 13th. He earned his third birdie of the early going at the par-five 15th before a bogey at the 17th would mark his final setback of the day.

Once he made the turn, Goff stepped it up to another level. The Kings Mountain, North Carolina, native generated four straight birdies at the second, third, fourth and fifth holes. He then carded back-to-back birdies at the seventh and eighth to get to 7-under par. His lead swelled to as many as six during the stretch of six birdies in seven holes on his back nine. On the par-four ninth, he saved par after his tee shot found a left side bunker with a gorgeous approach shot for a makeable par putt.

Goff, as noted in an earlier release, is carrying Brown’s bag this week. It is one of several tributes for Brown by the Wildcats who are playing in their first team event since Brown’s death in August.

“Today was just one of those days,” Goff said. “Everything was clicking, and I got hot on our back nine. It was nice getting to play with the team, which really helped me keep calm. Carrying Cullan’s bag made it that much more special. But there’s still 18 holes of golf to play, so I just need to keep doing what I’m doing and everything will take care of itself.”

Perhaps overshadowed by Goff’s record-breaking day, was a tremendously important and career-best round by Cook. The Frankfort, Kentucky, native generated a 3-under 69 to move to 1-under for the tournament and in a tie for 11th overall. He was 2-under through the first nine holes with birdies at the 12th, 14th and 15th. Once he made the turn, he played flawlessly with no bogeys. He picked up another birdie at the par-four sixth to conclude his 3-under round.

Cook matched a career low with the round of 69 which he set last season during the third round of the Bearcat Invitational. He finished that tournament with a career-low three-round total.

Redshirt senior Allen Hamilton scored a round of 77 and tied for 39th overall. Freshman Campbell Kremer enters Wednesday in a tie for 35th after he had a 78. Sophomore Cooper Parks logged a 79 during Tuesday’s second round and is tied for 45th overall. With the course showing its teeth, all three had bright spots with Parks generating three birdies on the day. Hamilton notched a pair of red scores, and Kremer began the day with a stretch of pars over the first four holes and a birdie at par-five second.