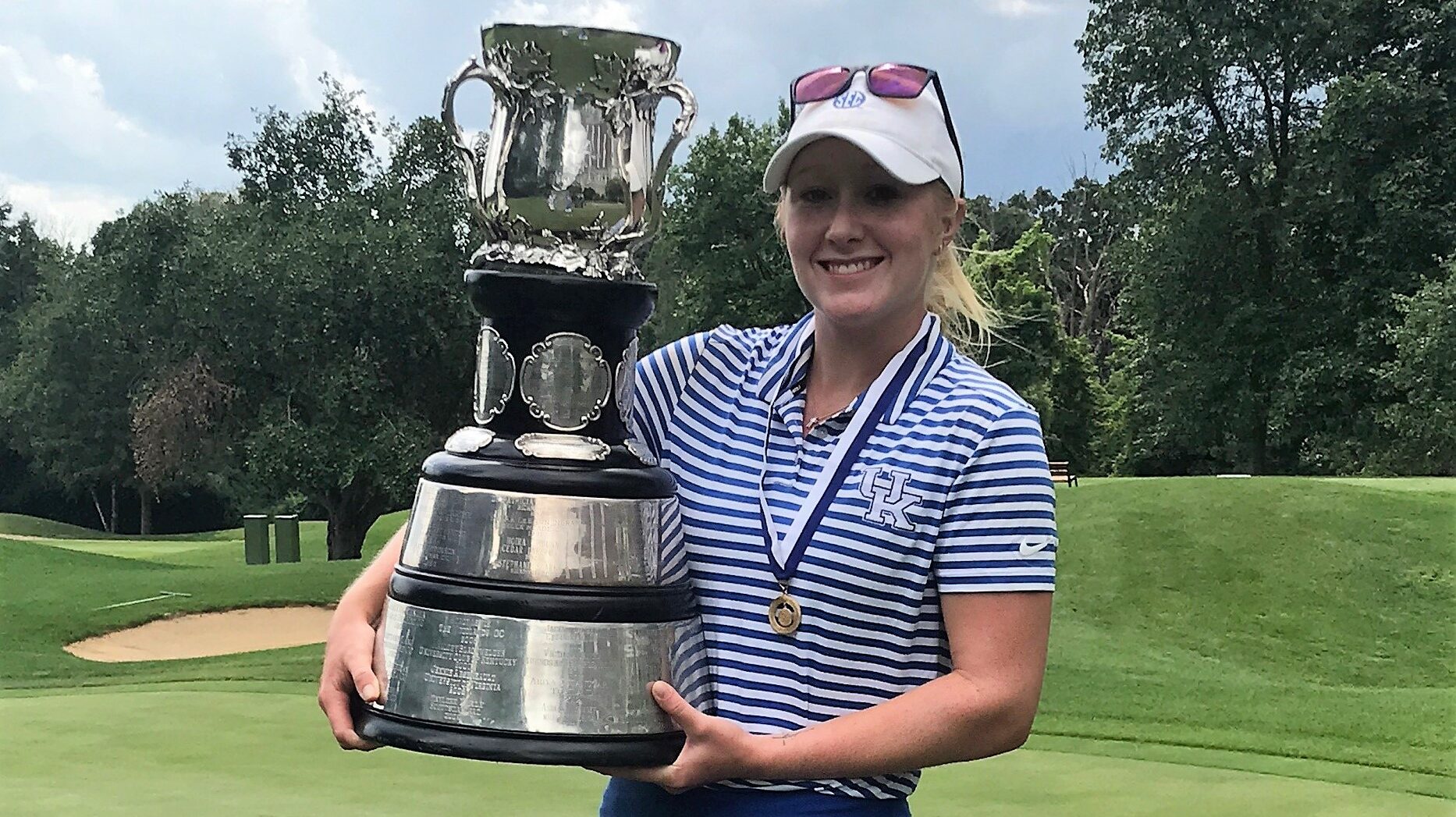 The Kentucky women’s golfer went toe-to-toe with some of the best amateur golfers in the region and came out victorious at the 119th annual Women’s Western Amateur. Shipley defeated Atonia Matte of Santiago, Chilen, 4 and 3 on Saturday in the championship round of match play to take home the W. A. Alexander Cup.

Shipley, who seems to play her best golf in match play, navigated her way through the 32-player match-play bracket with relative ease. Other than a 19-hole win in the opening round, Shipley got up early in the rest of her matches and closed the door early in several of them.

The Hastings, Michigan, native was the No. 5 seed in match play after finishing fifth in the two-round stroke-play format earlier in the week at 1-over par. Her 36-hole score included a first-round 71 (1-under par).

Shipley’s success in match play shouldn’t come as a surprise. She’s a perfect 4-0 in match play at Kentucky, including winning the individual match-play bracket at the East & West Match Play Challenge in the fall of 2016.

Shipley came out on top in a field that featured 120 players from 30 states and 12 countries. The tournament spanned five days with multiple match-play rounds over the final rounds.

It’s the second championship for Shipley in less than two weeks. She cruised to a four-shot victory early last week at the 28th Women’s Golf Association of Michigan Championship at the Saginaw Country Club in Saginaw, Michigan. There Shipley fired back-to-back rounds of 68 and 70 for a two-round total of 138 (4-under par).

Shipley is shaping up to be the leader of the 2019-20 team as a senior. She’ll return to Lexington in August as the most experienced golfer on the 2019-20 roster.

Shipley has played in 31 events during her Kentucky career with 82 rounds. She owns a 75.8 stroke average with a team-best three top-10 finishes and five top-20 showings.

Last season, Shipley recorded a 75.2 stroke average, behind only the record-setting Leonie Bettel, who has exhausted her collegiate eligibility. She tied for ninth at the Gold Rush Invitational and added a 14th-place finish at the Bettie Lou Evans Invitational.

Shipley isn’t the only Wildcat having a big summer. Incoming freshman Jensen Castle has been one of the best girls’ players in the country this year. Last week she placed second at the Girls Junior PGA Championship in Hartford, Connecticut. In a 144-player field that featured some of the country’s best girl golfers, including fellow freshman Marissa Wenzler, Castle finished in second place at 12-under par.

Castle also finished second at the ANNIKA Invitational earlier this year, helped her team to the Wyndham Cup title, qualified for the U.S. Girls’ Junior that’s coming up later this month and is ranked 10th overall in the AJGA rankings.

The Wildcats are less than two months away from teeing off the 2019-20 collegiate season at the Minnesota Invitational (Sept. 9-10) in Woodbury, Minnesota. UK will lose seniors Bettel and Claire Carlin but welcomes arguably the most talented recruiting class in school historywith Castle, Wenzler, Janika Rüttimann and Kelsey Wylie, in addition to the returns of Shipley, senior Josephine Chang, juniors Rikke Svejgård Nielsen and Sarah Ott, and sophomores Casey Ott and Ryan Bender.