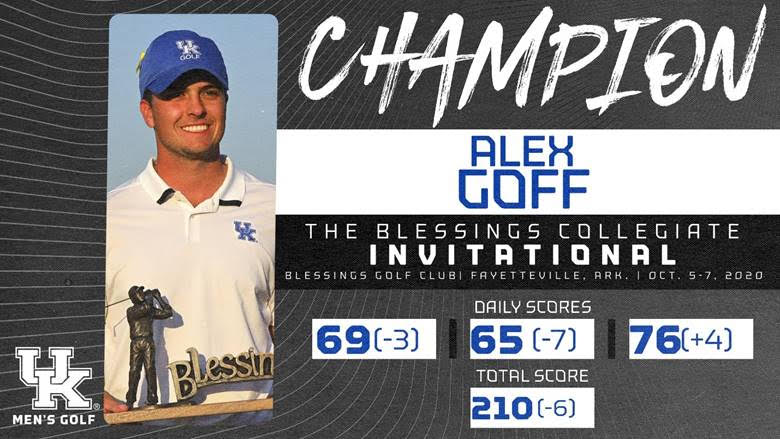 After seven months since their last team competition and just two months after losing teammate and friend, Cullan Brown, the Kentucky men’s golf team had something to celebrate on Wednesday. Despite some ups and downs on the final day of competition, sophomore Alex Goff, who carried Brown’s bag in his honor this week, captured his first collegiate victory at 6-under par at the Blessings Collegiate Invitational in Fayetteville, Arkansas.

Goff, who shot a 76 in the third round, edged Tennessee’s Hunter Wolcott and Texas A&M’s Dan Erickson who finished at 4-under par. Blessings Golf Club got the better of the Wildcats during the third round as UK fell to eighth overall in its first tournament of the 2020-21 season. Alabama won the event and finished five shots ahead of second-place Tennessee.

The win marks the first collegiate trophy for Goff who set career bests in every category. He had a career-low round of 65 during the second day of action. His total combined score of 210 is four shots better than his previous low and the win is a career-best finish.

GOLF Channel, airing live coverage of the tournament all week, along with the field following along with live scoring, thought that when Wolcott approached the 18th green he had a chance to tie after birdying 17. A par putt at 18 lipped out, enabling Goff to breathe a sigh of relief and celebrate the win. However, upon completion of Wolcott’s scorecard, it was discovered one of the tournament’s official’s had inadvertently entered a wrong score along the way and Goff actually held a one-shot edge on Wolcott entering the final hole. His bogey dropped him back into a tie with Erickson.

If only Goff had known that – his stress level would not have been nearly as high after a mistake he will certainly never make again.

The Kings Mountain, North Carolina, native began the day at 10-under par thanks to a round of 65 on Tuesday. He played even through his first nine holes and moved to 2-under with birdies at the 11th and 12th. He picked up a bogey at the 13th but approached the 17th with a six-shot advantage over the field. That’s when things got interesting.

After an errant tee shot at the par-three 17th, Goff opted to take the penalty and used a drop. He finished with a double-bogey at the hole and approached the 18th with a comfortable four-shot advantage. All five UK players found a left bunker on the 18th fairway. Goff was the first to play his shot and laid up short of the green. However, it was discovered that he had accidently played the wrong ball and was forced to take a two-shot penalty.

“Coach (Brian) Craig walked with me and just told me to get this up and down and I’ll win,” Goff said as he described what was going through his mind mentally after the mistake. “He said, ‘You’ve played too good of golf all week to let one bad decision ruin it.’ So, I just tried to hang in there and I knew that Cullan was watching down on me and he was with me every moment. I truly believe that he was the reason I won. I can also say that if he was still here, I probably would have come in second.”

Goff played his correct shot, took the two-stroke penalty and eventually made a seven on the hole. He along with his teammates and the Kentucky women’s golf team had to sweat it out a bit as Wolcott birdied the 17th – in what they all thought was a tie score heading into the final hole. Fate, in more ways than one, intervened and Wolcott’s par putt lipped out before he made bogey on the hole.

Perhaps Brown allowed his revered sense of humor to shine through once again.

“In all of my life, I’ve never seen anything like that,” Craig said. “But, I’m so proud of Alex and the way he represented Cullan this week and honored Cullan. Cullan was truly the finest young man I think that I’ve ever known. The Brown family is having a tough time and I know this is going to put a smile on their face.”

Goff’s final two holes were representative of the teeth that Blessings showed on the final day. Not a single team played under par during the final round.

Kentucky entered the final day in contention and just four shots off Alabama’s pace. The Wildcats got off to a great start and were 2-under through three holes and moved to within two shots of the Crimson Tide. From the second hole until Goff birdied the 11th, no Wildcat earned a subpar score.

Graduate student Jacob Cook concluded the week tied for 23rd following a 78 during the final round. He was nine-over par through 10 holes but played his final eight holes at 3-under par to rebound in positive fashion. He narrowly missed out on his second career top-20 finish among a loaded field.

Redshirt senior Allen Hamilton fired a team-low 75 in the third round and capped the tournament in a tie for 37th. Freshman Campbell Kremer and sophomore Cooper Parks tied for 55th overall. Parks had a round of 79 and Kremer, appearing in his first collegiate event, shot an 81 on the final day.

The Blessings was played simultaneously with the 14 women’s teams comprising the SEC. Kentucky’s women’s squad matched the men’s eighth place showing and freshman Laney Frye led the way with a tie for sixth.

The Kentucky men’s team returns to action at the Legends Collegiate Invitational hosted by Vanderbilt University Oct. 25-27. The field is expected to be loaded with SEC teams once again.